Since moving to Cornwall I have a garden for the first time in 12 years! Living in rental accommodation, a flat and then a town house with only a tiny patio meant that growing anything had to be done in containers. I was lucky with the town house as it had a flight of wide steps so I could use the edges for containers too. It is surprising how many pots and plants you can cram into one space and luckily the house faced south too so quite sunny.

My number one priority on a move to Cornwall though was a garden. I had had enough of container gardening. Several things started to irk me: the continual chore of re-potting as plants grew, the emptying of summer bedding for spring bulbs and vice versa, the limited number of things I could grow and the struggle with the weight of pots. No. A garden was a must have.

We moved into our house in the country at the end of March 2016 into a fairly mature and quite small garden. Roughly 6m wide and 30m long. A narrow strip with a barn on the left as you view the garden from the house and my neighbour’s garden to the right. In front is pasture land and Cornish hedges, a hill and a derelict engine house. It is very much open to the wind (which when we bought the house we were unaware of) and we get a lot of ‘weather’ coming over from the Atlantic. When the weather forecasters mention south-westerlies we get them first. After all we are only 11 miles from Lands End as the crow flies.

My first post about the garden was written in June 2016. You can read it here.

There have been a few changes since then. But for the first year I was extremely patient and watched to see what grew and the direction of the sun and how things changed throughout the seasons. By the autumn I was ready to start planting, but restrained myself to buying spring bulbs, most of which were planted in pots.

My garden is divided naturally into six distinct parts – I wrote about each of them here.

By August 2018 the plan I had in my head was finished. Well almost. There was still one change to be made which happened in 2019. But the main plan was to reduce the lawn area and give myself more space to plant flowers. 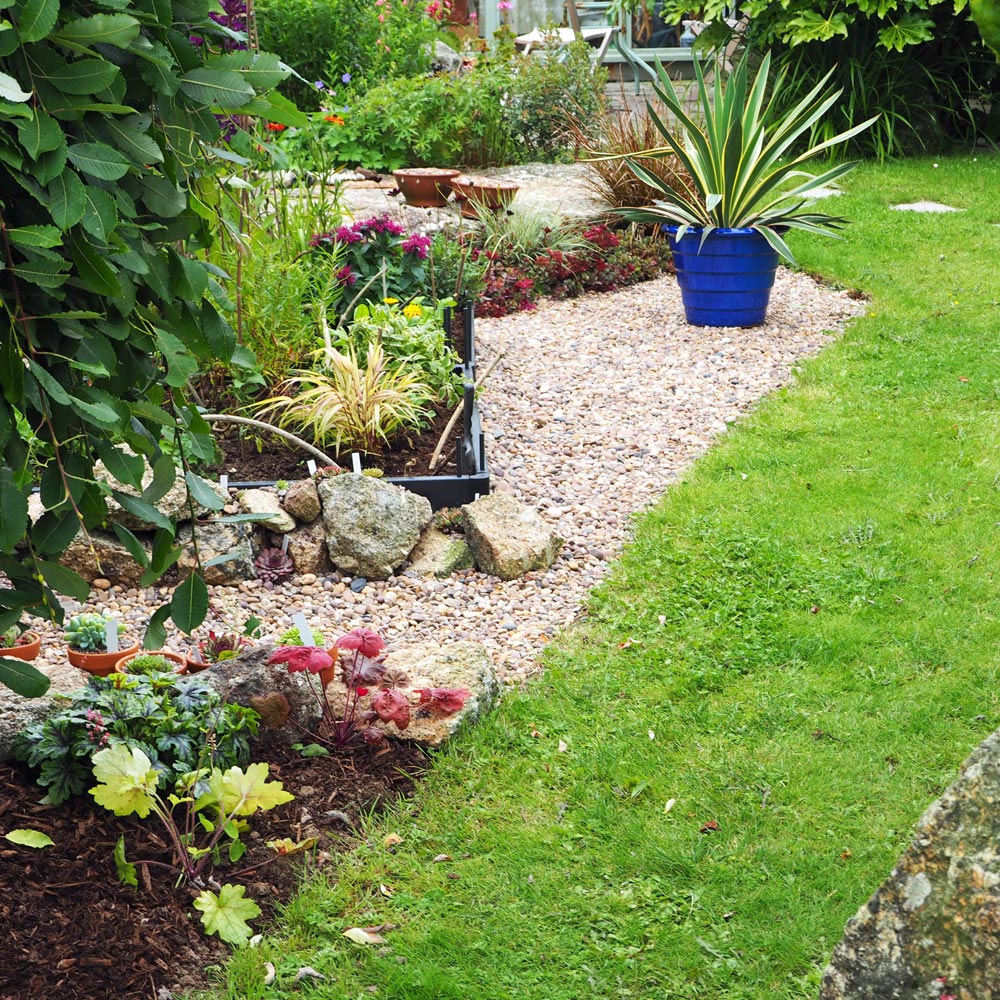 Plants come and plants go. Some I planted in the wrong place, others were eaten or damaged by slugs and snails (S&S) and sometimes I was too ambitious about how many plants I could cram into one area. I learned a lot about my garden. The Mediterranean style I favour was not to be. It is too wet and too windy here. Most of the time the winters are wet and mild, very few frosts, so some half-hardy plants can survive outside, but when we got hit by the ‘Beast from the East’ in February 2018 it wiped out a lot of my tender plants.

April 2019 and you can see the changes in this post. As I began my 4th year I still had plans.

You can find a plan of my garden here. And a list of plants here. These will inevitably change as time goes by and you can see many of the flowers I grow by looking through my garden posts.

At the end of 2019 the final part of the plan was put into place. The narrow strip of lawn leading to the raised beds has been removed and a couple of stepping stones placed to allow entry and exit. The weather turned very wet so I didn’t get around to covering this area with bark as intended, but come the spring I shall give it a good overhaul – removing weeds and planting some shade loving perennials.

And as I head into 2020 and my 5th year the Wild Garden (utility area) will get a makeover. I have already made a start on the Cornish hedge on the left-hand side, but this year my attention is on the sunny right-hand side where there is a sort of rockery wall, but much lower. My aim is to remove the top row of stones and remove all the weeds, then replace the stones and fill the cavity with gravel and sand for drainage and then find rockery or alpine plants that will spread over the wall.