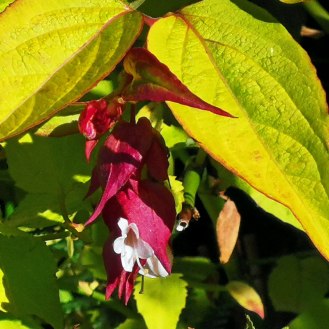 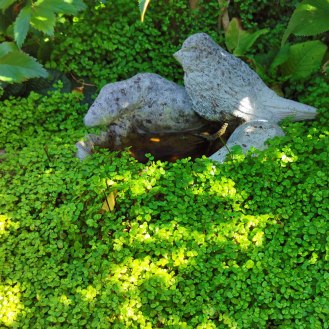 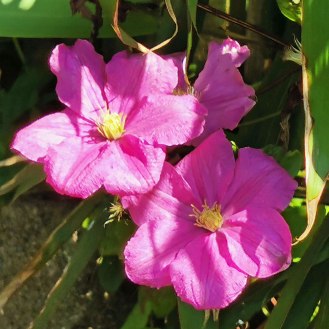 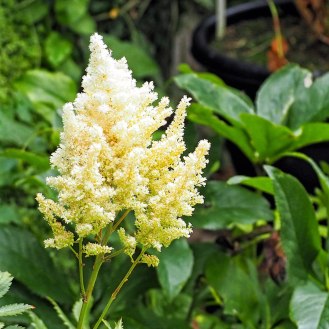 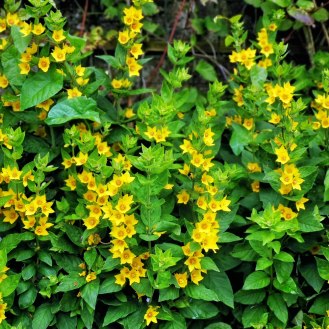 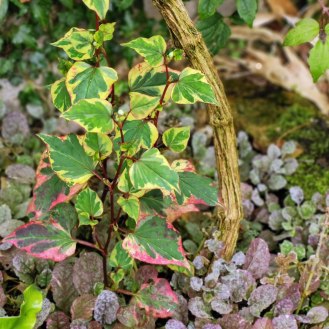 The Woodland Border runs alongside the next door barn and faces north west so is very shady. In fact during the winter months when the sun is so low it never receives any direct sunlight. At this time of year though parts of it are in the early morning and the late afternoon/evening sun. The main colour in this border all year round is green. Ferns and foliage plants dominate, though throughout late spring and early summer additional colour comes from the numerous pink Geranium x oxonianum. Now they have become a bit straggly and it is time to cut them back. Some may put on more flowers before the winter arrives. This area of my garden is predominantly a spring border, with early bulbs and hellebores and primroses, but this is what it looks like now. 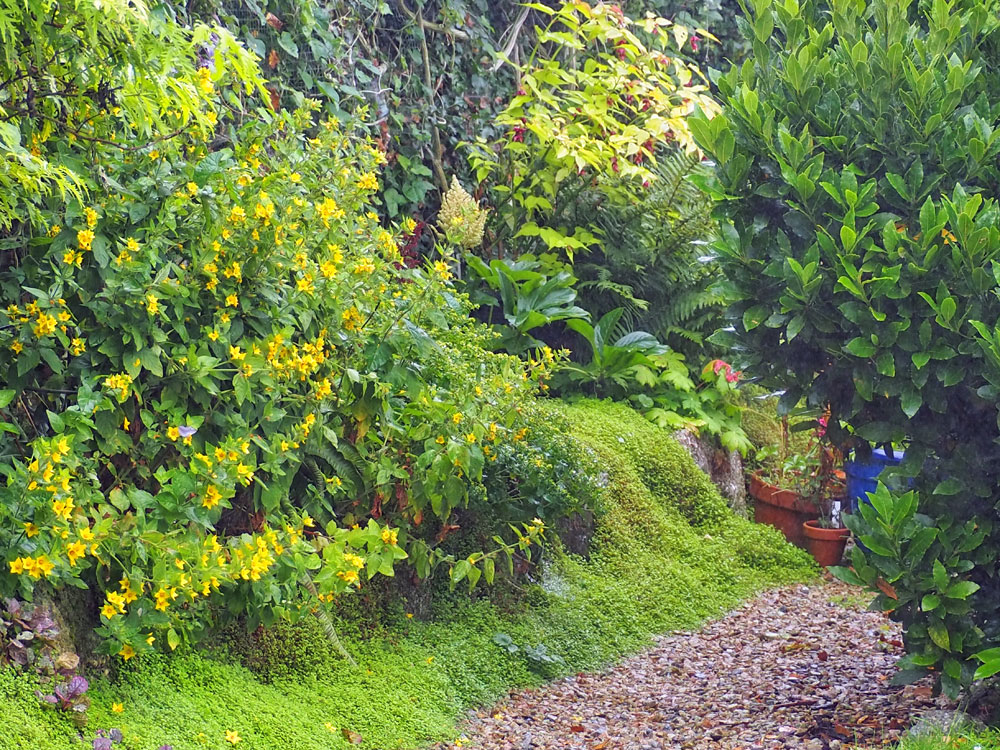 (1) Himalayan Honeysuckle (Leycesteria formosa ‘Golden Lanterns’)  is a vigorous, upright, thicket-forming deciduous shrub with bright, golden-yellow, heart shaped leaves and, from summer into early autumn, pendulous racemes of white flowers with burgundy bracts followed by red-purple berries. I have mine growing in a container but it flowers best in full sun to light or open shade so I need to find a more suitable spot for it. A rooted cutting has been planted in the new border close to the twisted hazel tree. 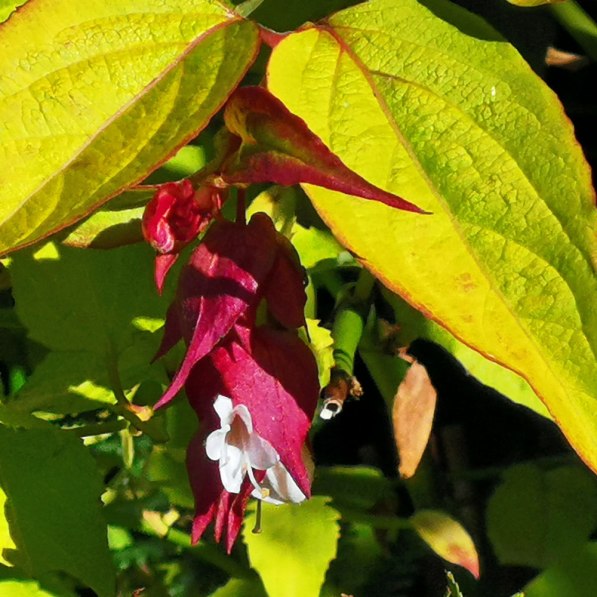 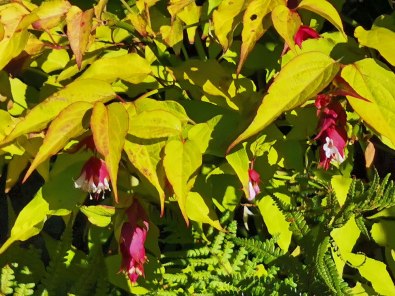 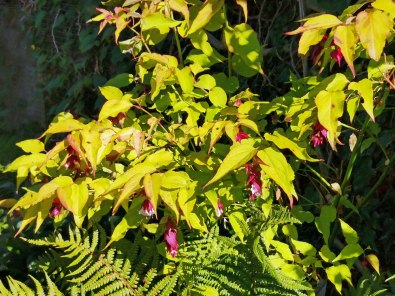 (2) False Goat’s Beard (Astilbe × arendsii  ‘Weisse Gloria’  and ‘Fanal’). Astilbes are shade and moisture-loving plants, bearing masses of ferny foliage, from which elegant plumes of feathery flowers appear from late-spring. They do best in woodland garden schemes where their pink or white blooms provide a splash of colour. 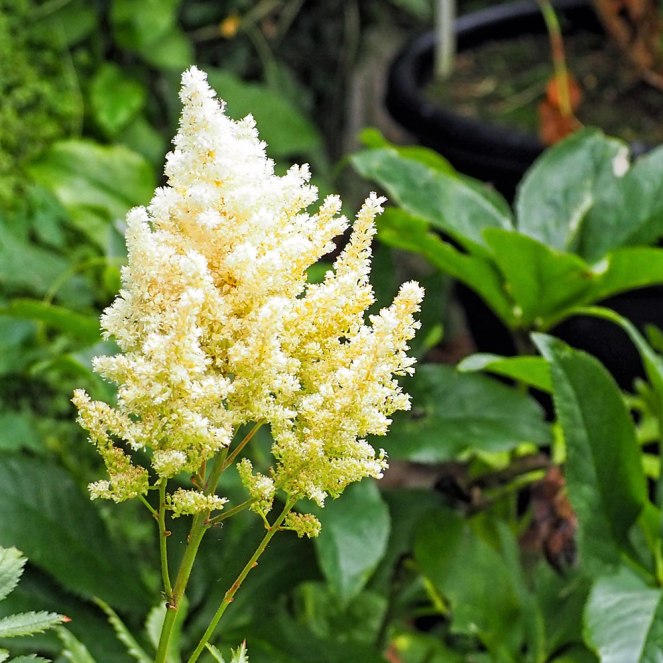 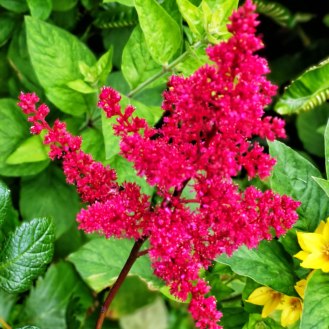 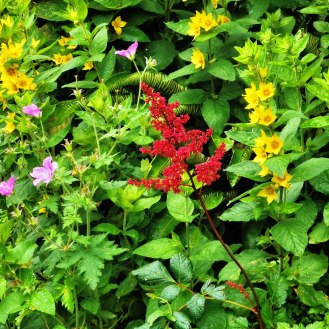 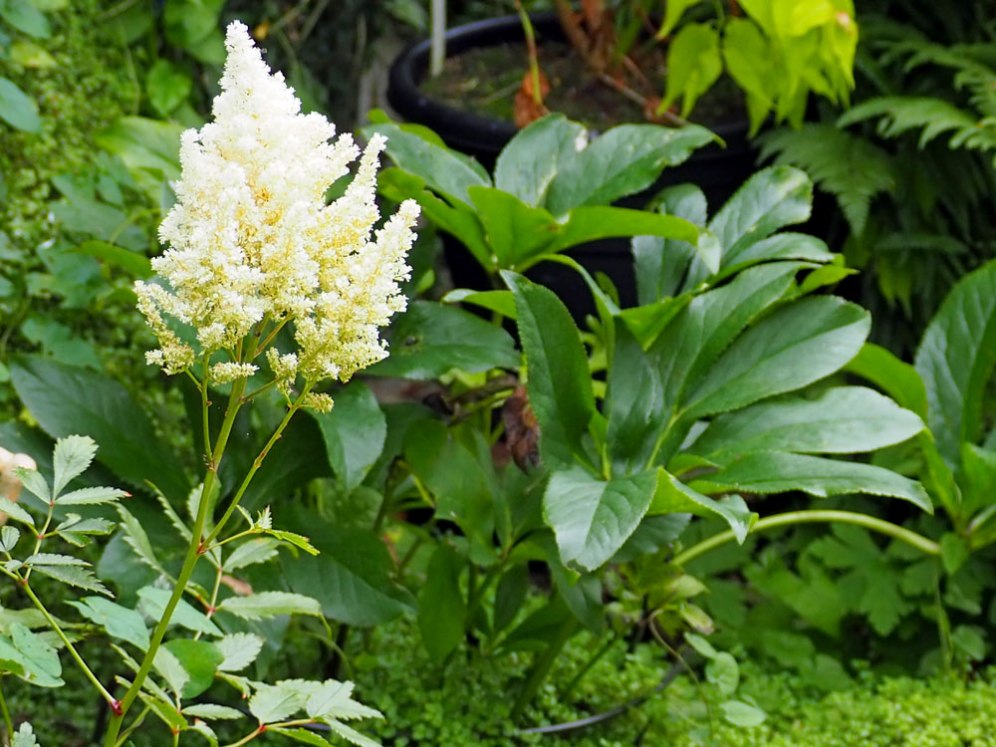 (3) Unknown clematis – this adds a splash of colour to the border close to the conservatory. Last year it was badly mauled by earwigs. 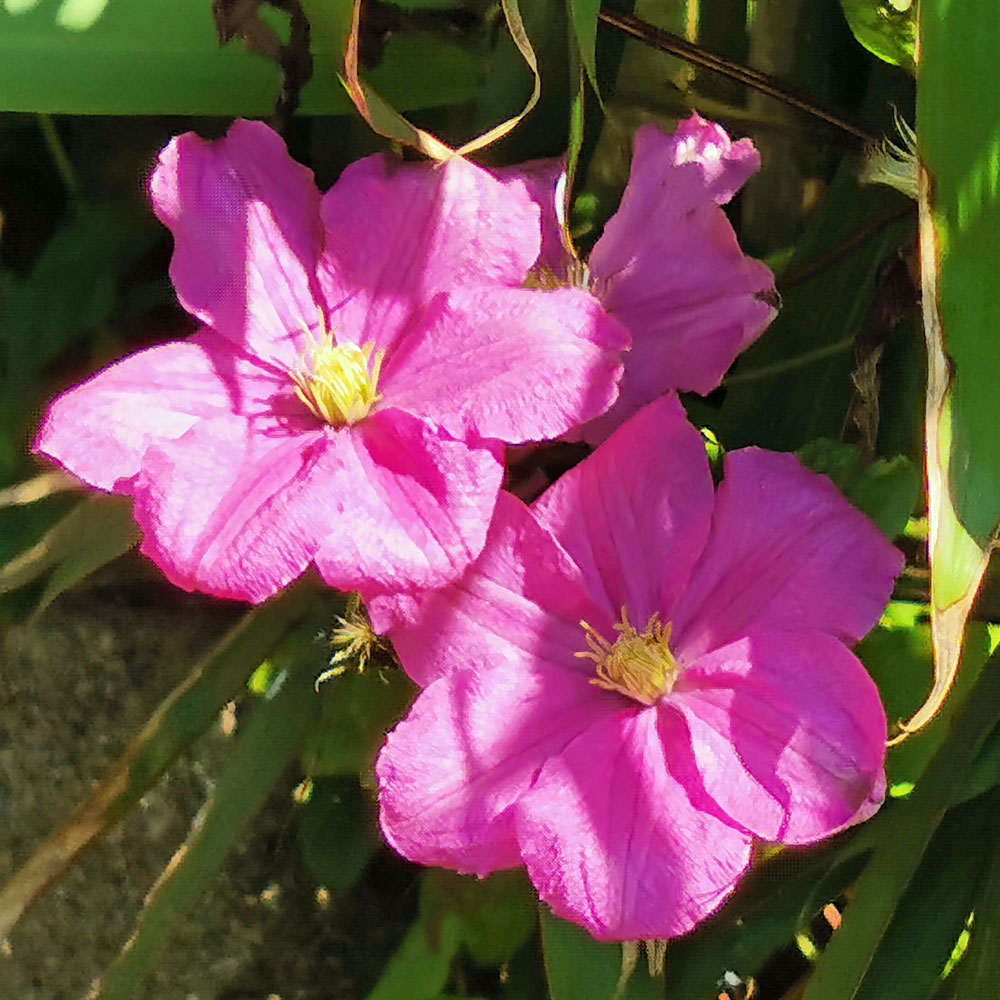 (4) Lysimachia punctata / Yellow Loosestrife /  Whorled Loosestrife is a vigorous plant, spreading from underground stems. It makes plentiful upright stems that support whorls of yellow flowers and is pretty tough. It makes a good ground cover but being tall can suffer from blasts of wind in my garden and end up flopping over the wall. I’m considering making some changes to this border and this might be one plant to go. Maybe to be replaced with a couple of Astrantia? 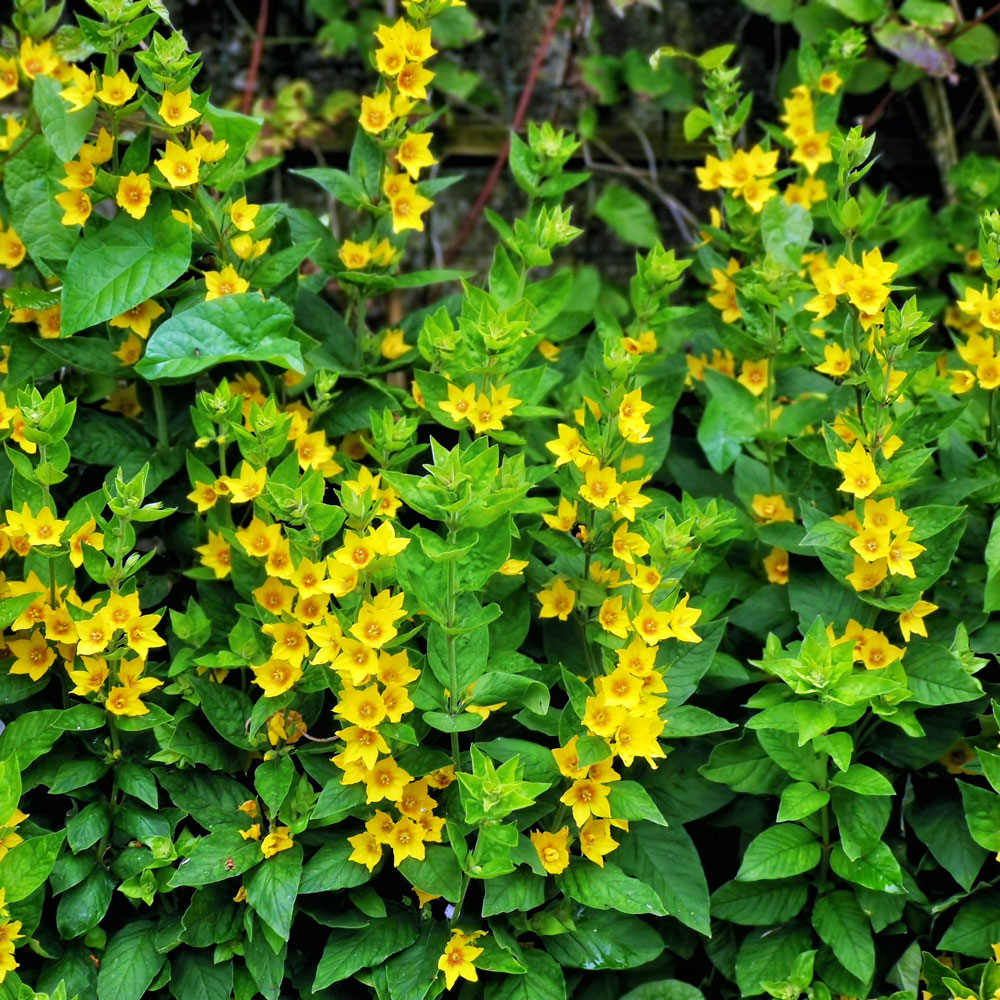 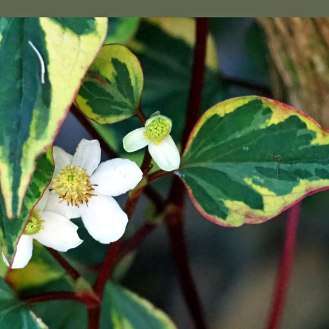 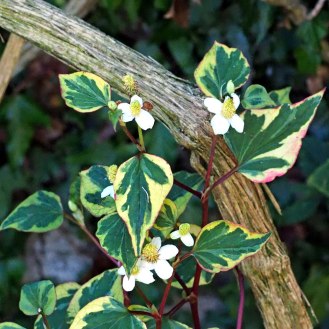 (6) Bird bowl set amongst baby’s tears (Soleirolia soleirolii) also known as angel’s tears or mind-your-own-business. It prefers shade and moderate moisture and loves my woodland border! The masses of tiny leaves clothe slender spreading stems that root as they run, forming a dense deep-pile carpet. As it covers the ground it will run over rocks, fallen logs, and so on, clinging to their shape and in my border it grows up the granite wall and intermingles with the ferns. It can be quite invasive and prevent other plants from growing well so I regularly have to pull lots of it out. 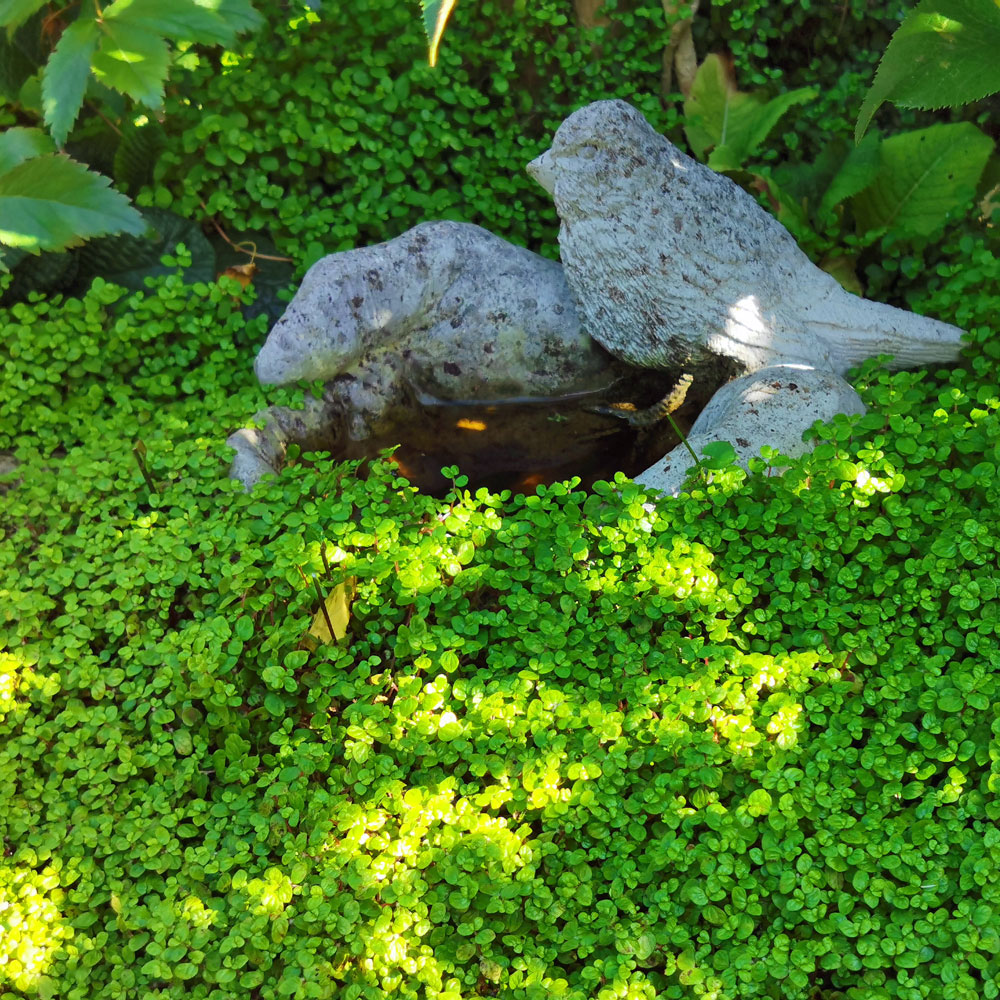 A large part of England is undergoing a mini-heatwave this weekend. It’s not so hot down here in the south-west and we suffer from a lot of sea fret / low cloud when it is humid. Too hot for gardening though and perhaps it is sensible to stay out of the heat. I shall be seeking out a shady nook and enjoy putting my feet up and reading a book, hopefully!  As always, if you want a peek over other people’s garden walls then please pop over to our host, the lovely Jon, AKA ‘The Propagator’ where you find links to many more wonderful garden enthusiasts from all over the world.