For a change this week we are going to have a look at what is happening in the north-facing courtyard garden which gets very little in the way of direct sunlight though at this time of the year a little does appear in the early morning and mid afternoon! 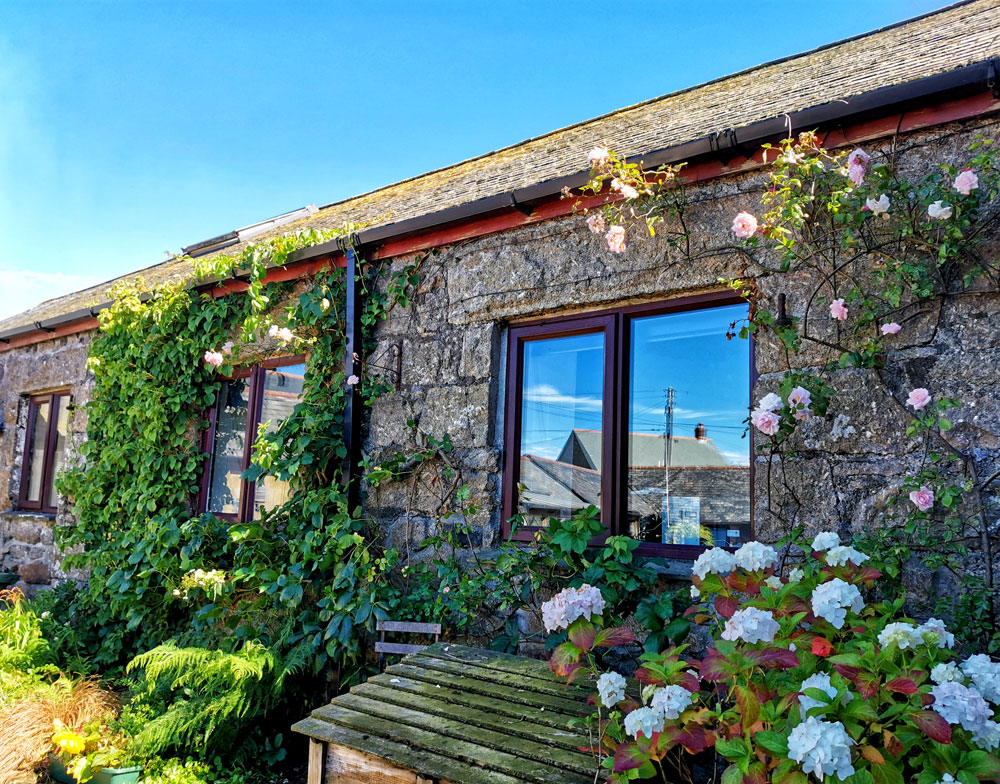 Our little house is tucked away in a courtyard – it used to be a dairy herd feeding stalls. There is no garden here, but along the front of the barn is a granite ledge in which all sorts of things self-seed. This year wild violets seem to have taken hold. The former owner grew a Hydrangea petiolaris (a climbing hydrangea), a Virginia Creeper as well as a pale pink climbing rose up the walls. The creeper drives me crazy as it grows up and over the roof and being as the ledge is not level so it is difficult to put a ladder on it to reach high up. The hydrangea never has many flowers. And the rose is definitely passed its best.

I therefore grow plants in containers.

(1) White mophead hydrangea. This comes from a cutting of one my late father gave to me. It has been in a pot for years, but seems to be doing OK. This year the leaves have turned red much earlier than usual, but we have had weird weather. Hot then cold, dry then wet. And it was blown over in a recent storm! 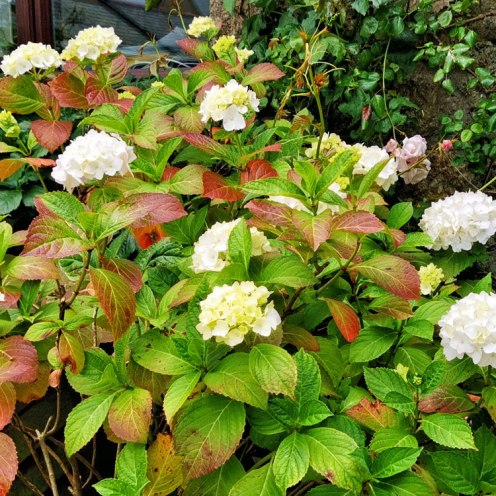 (2) Fuchsias. Several hardy fuchsias were bought a couple of years ago especially destined for the steps here. Last year they suffered dreadfully from rust (as did my mint in the back garden – I think maybe spread from the musk mallow?) This year they are beginning to look good. 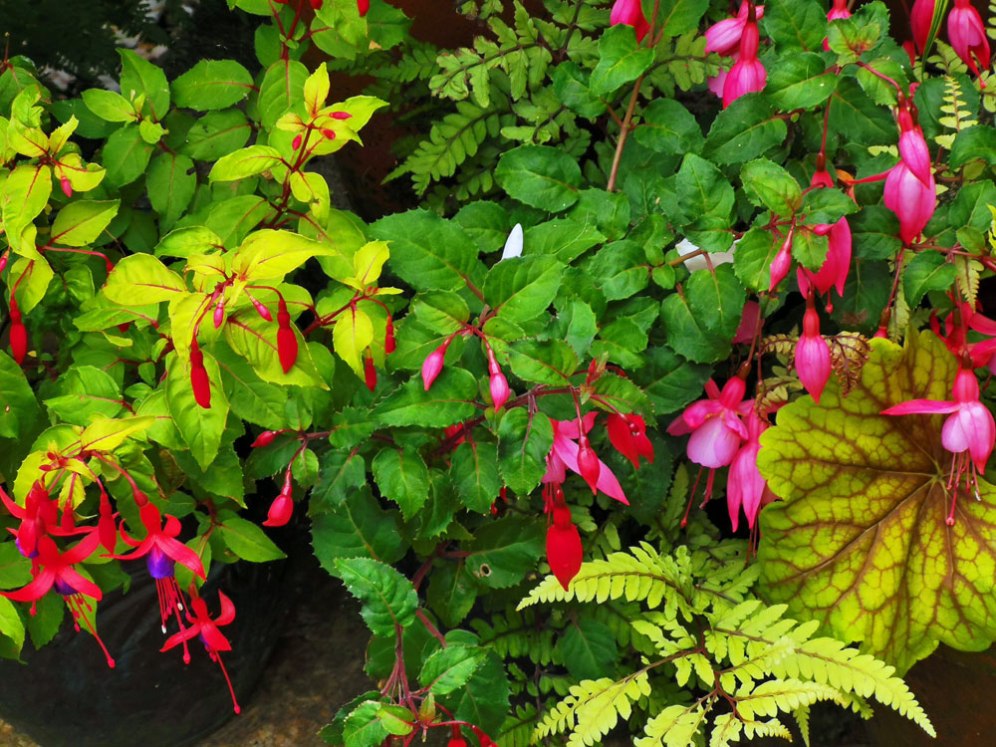 (3) Also on the steps is a Hakonechloa macra which I think is ‘All Gold’. I planted it in the back garden, but it wasn’t doing well. Now in permanent light shade it is fine and makes a lovely contrast to the fuchsias and Heuchera ‘Red Lightening’.

(4) In one of the Fuchsia pots is Elke. A very pretty hardy geranium that likes shade. A difficult flower to photograph though as the deep magenta colour seems to get overexposed. This time I managed to get a pretty accurate representation of what is a very lovely plant which flowers for ages. 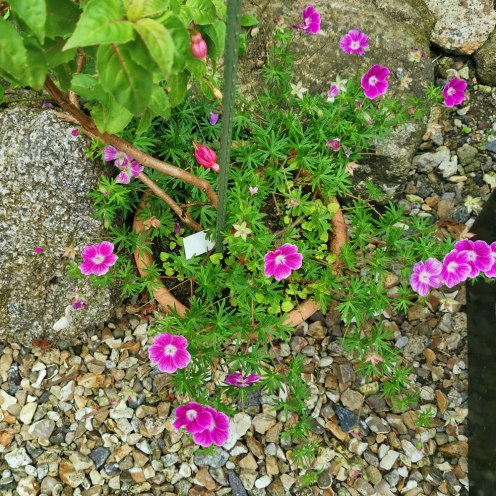 (5) The hare I bought in December 2018 is still happily resting on the top step along with two female Skimmia  japonicas – one with red berries and one with white. I am happy to see the berries forming. Next to them is my recently purchased Heuchera ‘Ginger Ale’

(6) Centranthus ruber, also called red valerian, spur valerian, kiss-me-quick, fox’s brush, devil’s beard and Jupiter’s beard. These red and white weedy wildflowers tolerate dry conditions and poor soil and have self-seeded at one end of the granite ledge in amongst a clump of Crocosmia and ferns (or bracken?) I regularly pull them out of the gravel where they like to grow before they get too big as they have enormously long tap roots! Pretty flowers though and the pollinators love them. 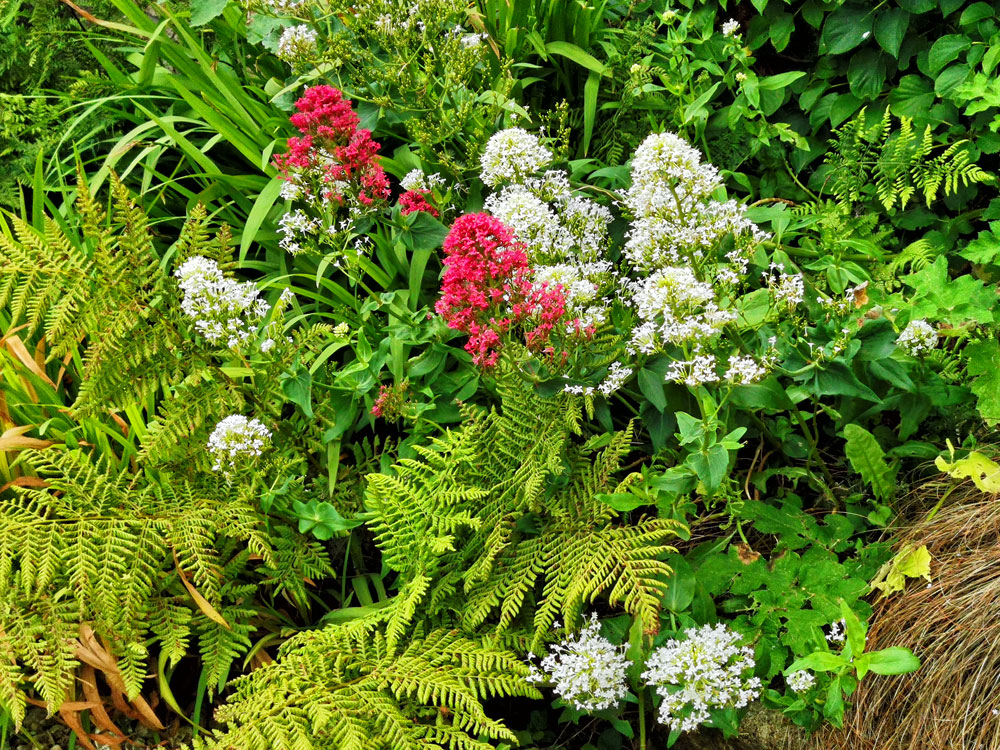 I’ve just spent the morning pulling down loads of the Virginia creeper and dead-heading the roses and cutting back the Periwinkle that I planted in a corner that is full of granite rocks (header). My reasoning was to stop other weeds from growing there, but I may have created a monster…  the sun has just appeared so I might take the rest of the afternoon off and go and sit outside on the Zen Patio and read a book. Hope you all have a lovely weekend too!