This week Patti (one of the lens-artist group of talented photographers) has asked us to consider the value and necessity of cropping a shot as a way to bring out its best qualities. I use cropping a lot. For Becky’s square challenge (usually posted on Travel Words) a lot of images have to be cropped to a square format if they have not been captured in the 1:1 format in the camera.

But there are other reasons to crop. In the image below I took a photo of the lovely stone in a Cornish hedge along with the native flowers which grow on it. The background of the farm houses and building and a smidgen of sea didn’t add anything to the photo and the textures I was wanting to show, so a tight crop was made.

After removing the buildings and the rock on the right with the blurry cow parsley you can focus on the lovely necklace of navelwort at the base of the rock, the ribbon of ivy and the relaxed frothy heads of the contrasting cow parsley.

A row of ferns growing in the lane also caught my eye, with the sunlight fallen on the new unfurling leaves.

Again I just needed to tidy this photo up to remove excess greenery at the top and right that unbalanced the composition.

This pretty apple blossom needed to be tightly cropped as it was not necessary for all the twig in the top left to be displayed.

And one last image also taken on the same walk is this honeysuckle in bud. Nothing major needed to be done here just a bit of a tidy up so that the stem on the right was removed. 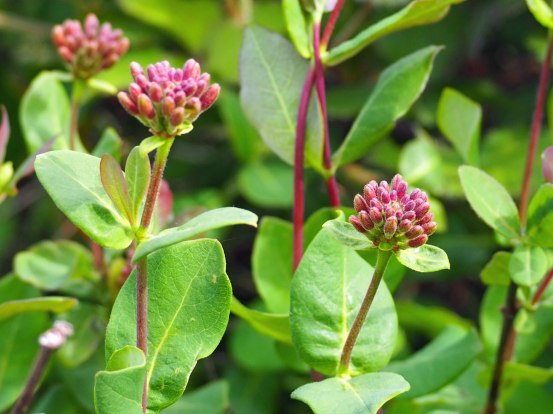 And my final photo was one taken at the beach in Marazion today. The sky was a wonderful azure blue and the clouds fluffy and white. The original image was taken in a very wide panoramic format using my phone. It was a bright day and I couldn’t actually see the image on my screen so it was very much pot-luck! On downloading it to my computer I wanted to focus on those central clouds and eliminate the unwanted buildings on the right hand side. The bit of seaweed at the bottom was distracting too.

After cropping in from both sides and the bottom, using the rule of thirds to position the beach in the bottom third I felt this was a much better composition. And that annoying seaweed has been removed too. But the clouds remain the focus.