Bluebells in Cornwall often grow in the open and not just in broadleaf woodlands or the outer edges. I see more bluebells in the lanes and on the hill than in the wood. I think of them as May flowers, but they seem to appear in April now, maybe because Aprils over the past few years have been warmer.

Following the horse trail around the base of Trencrom hill leads to a little dell where the bluebells grow in profusion. But before we get there let’s enjoy them where they grow at the sides of the path 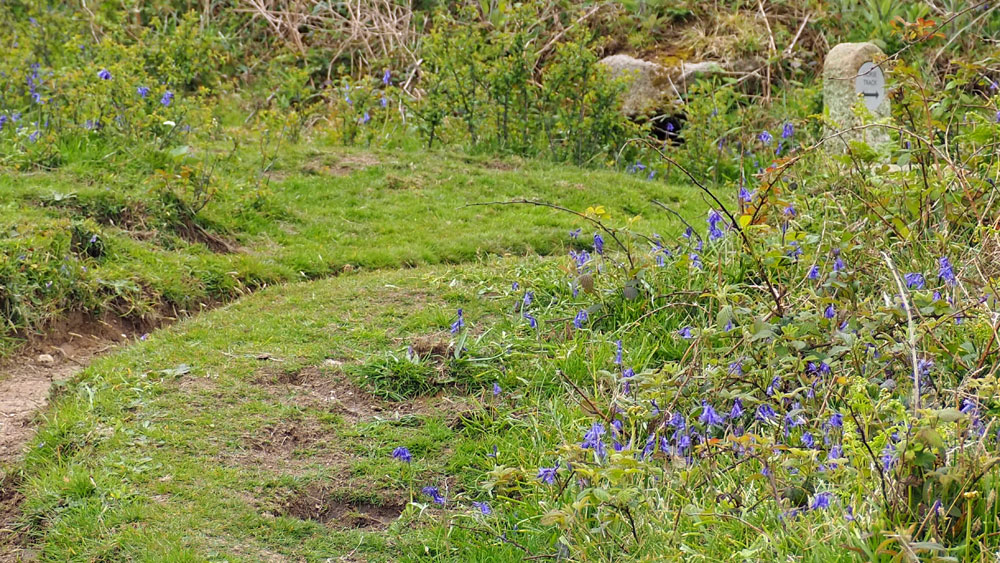 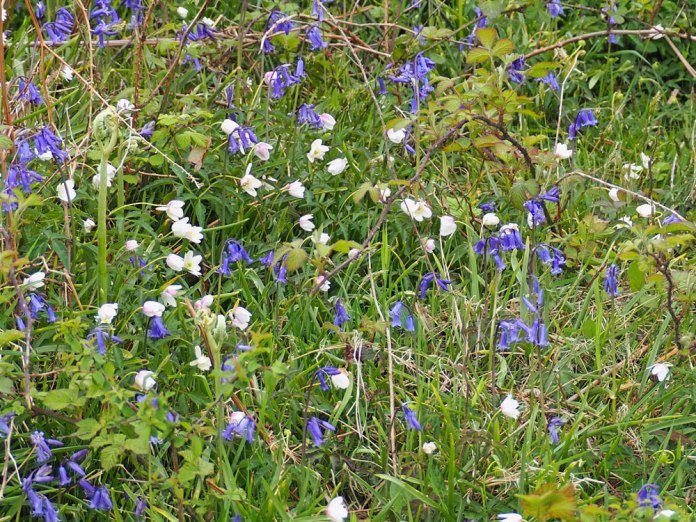 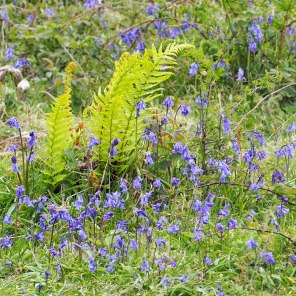 There’s also white wood anemones in a few places, hard to photograph because they are growing amongst brambles and bracken.

The bluebells line the curves of the trail, you need to watch your feet so you don’t trample on them! Plenty of trip hazards too!

Before we reach the dell I spot a tiny paddock with a carpet of flowers so obviously I have to divert to see what that’s all about. We are talking native bluebells here by the way. The ones that only flower from one side of the stem and the flowers always droop downwards. Hyacinthoides non-scripta, otherwise named common bluebells, English bluebells, British bluebells, wood bells, fairy flowers and wild hyacinth. I’m rather partial to fairy flowers. They are also not really blue. If you examine them closely you will see that they are violet-blue with a more turquoise stripe on the base of the tubular bell flowers. 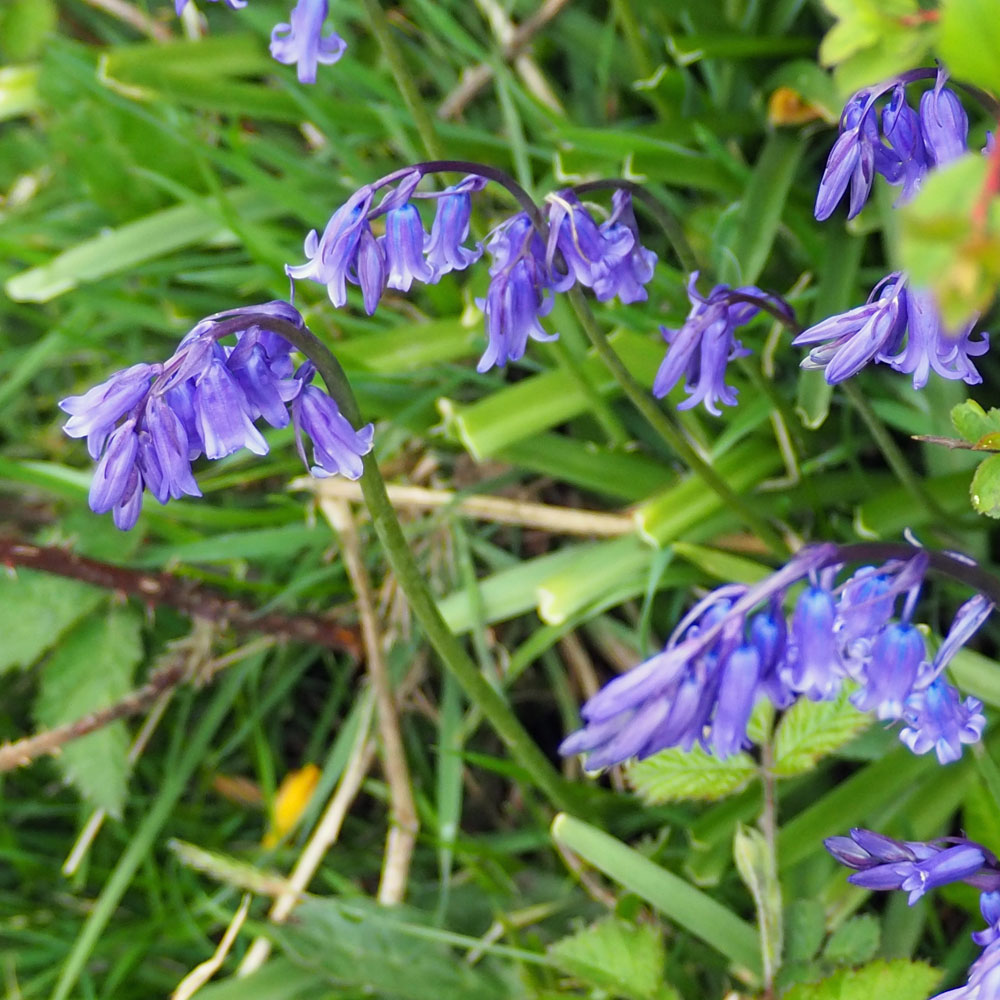 My photos aren’t so clear as it was a bit breezy on the hill! Never a good thing when trying to take close-ups of flowers.

Back on the hill I follow the winding path to the dell, pausing to take a photo of a tree I have not noticed in flower before. Apple maybe? I will need to have another look later in the year.

When I reach the dell I am not disappointed, This natural hollow is filled with blue. And the fresh lime green of the trees are a lovely bright contrast. The views aren’t bad from here either. 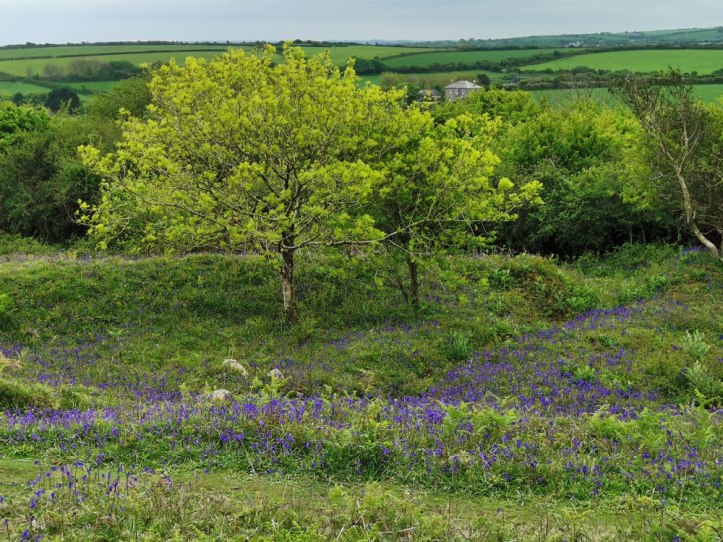 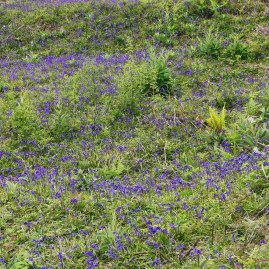 The circular route around the base takes you onto part of the St Michael’s Way which is  one of the Camino routes. I haven’t walked the entire route Lelant to St Michael’s Mount, because I think it is badly signed and badly maintained. For instance the next section from the hill was signposted (I say was because the sign has disappeared) over a stile into a field which is usually full of cattle and the not only is the entrance a quagmire but there is no indication where the ‘path’ exists across the field. You’d think a route as important as this would be properly maintained. Anyway I digress. 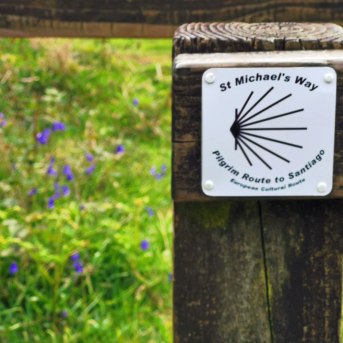 Along this eastern side of the hill there are not so many bluebells even though this is the edge of the woodland. There is however a rather lovely track that is a lot less uneven and lined with many native trees such as oak, beech and maple and holly, along with hawthorn and others I can’t identify. Wild honeysuckle is prevalent here too so in the summer it is a highly fragrant stroll.

Exiting onto the lane I make my way up to the gate where I usually take my photo overlooking Godrevy lighthouse and the beaches to the north. Not today though as it is overcast and cloudy. Time to hurry home before it rains. Though one last stop to take a photo of the cow parsley just making its annual appearance. 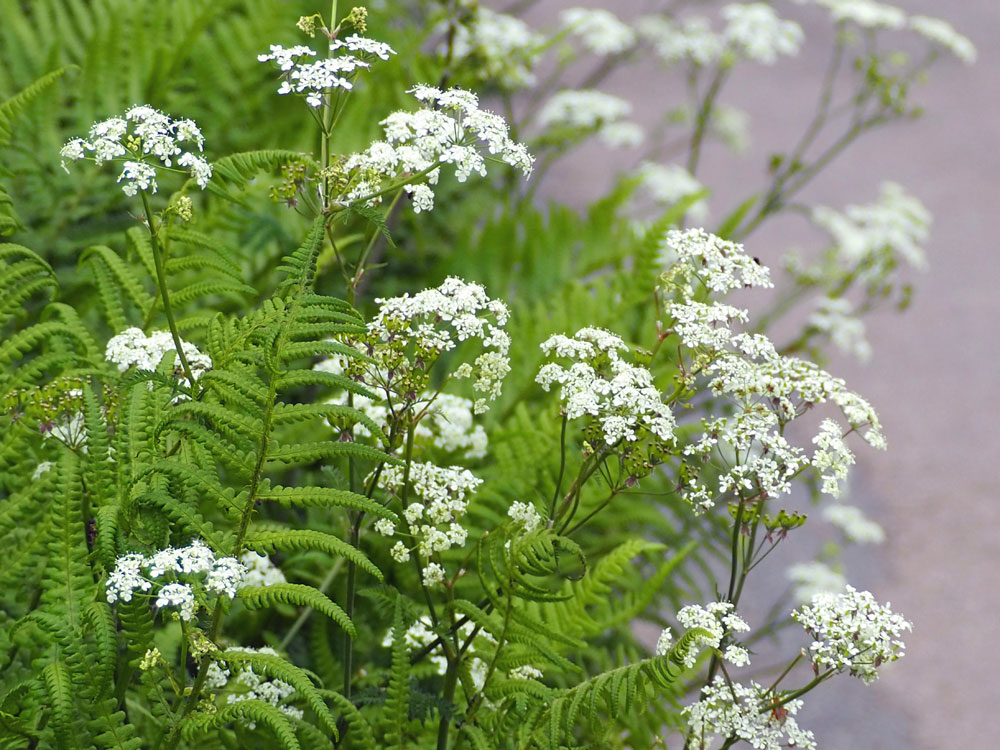