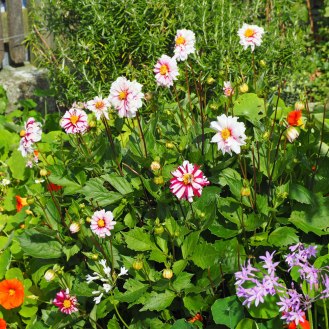 September started off quite chilly and I was dismayed by how quickly the days shorten. Dark in the countryside really is dark. No street lights here. In contrast though the stars are bright as was the  “micro harvest moon” (so named because it is the smallest it has been for a while on account of being at its furthest point in its orbit around the earth). We had a lovely week of warmth followed by rain and wind this week, but in that brief interlude I decided on another minor project. Well two really, but one will wait until next year. Photos have been taken in between some very heavy showers!

I hope you all survived the gales and thunderstorms and torrential rain that hammered its way across the UK this week. Not a week for gardening, but I did manage a quick look around on Thursday when the sun shone for several hours. Got to make the most of it now.