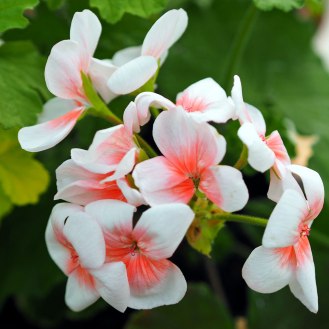 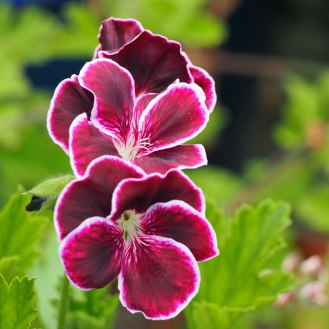 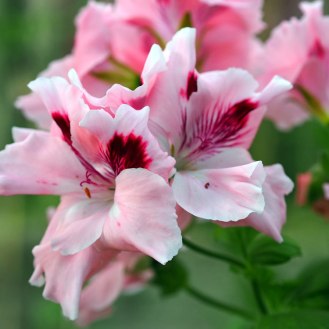 I wrote a post about these flowers last year, but I bought some new varieties in the autumn in small 6 cm pots and they are in flower now so I thought I would introduce you to them. In early May I  spent a weekend potting up all my older pellies and removing the cuttings from pots that I had stuck in when bits broke off. The scented leaf ones have done really well and I might leave some of the larger plants out this winter. I really have far too many plants in pots and have to stop taking cuttings!

The species Pelargonium is a half hardy shrub first collected in South Africa and brought to Britain in the mid seventeenth century by sailing ships from the Dutch East Indies Company.  NOT a Geranium as it is still often mislabelled in nurseries around the country. The name Geranium rightfully belongs to a group of hardy herbaceous plants native to Great Britain, Northern Europe and North America.

There are over a dozen varieties including Regal, Zonal and Scented-leaved which I tend to favour, though the new Stellar Pelargoniums which were bred as recently as the 1970’s in Australia, are quite exotic looking. You can use these flowers in the borders, in tubs or containers or in hanging-baskets or in a glasshouse. They are cheerful, colourful (from white to dark purple and almost black) and fairly resistant to pests and diseases. Even the S&S leave them alone which is one good reason for me to grow them. In winter I bring them indoors and now that I have a cold conservatory they do very well, continuing to flower most of the year.

I had ordered 8 new plants and only one has failed to survive, Lord Bute. I have to order him again… in fact a few more of these lovely plants might join him. They do after all keep me happy during the winter months.