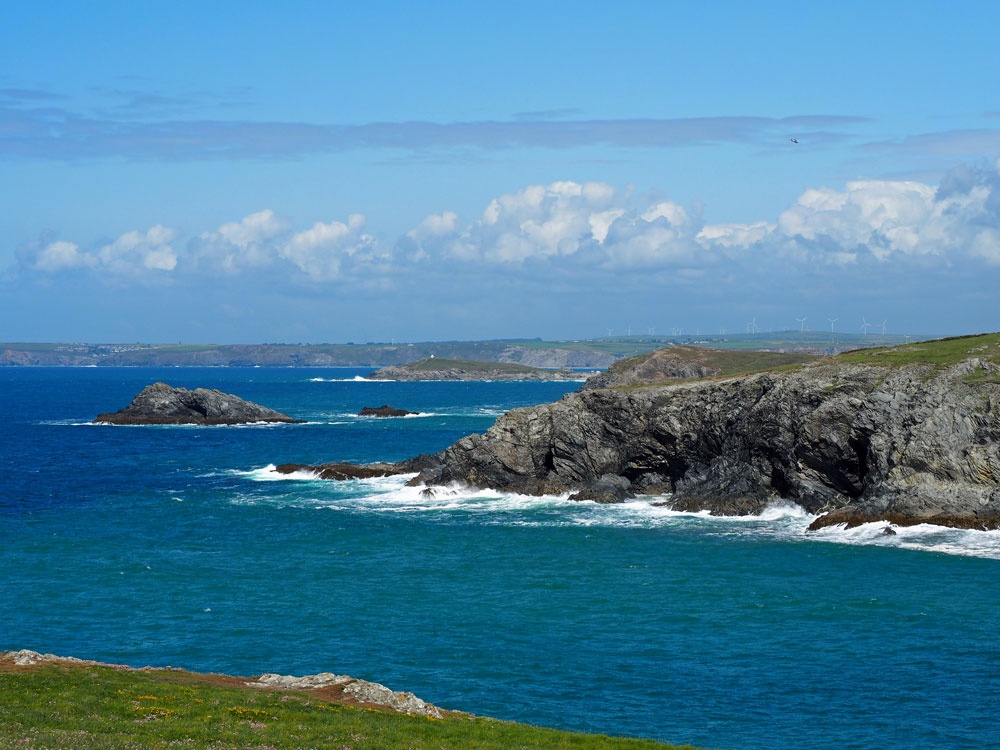 On a sunny and showery Monday in June my son and I headed for West Pentire to seek out the wild flower meadows there, in particular the poppies and corn marigolds. We were not disappointed. Parking the car near the Bowgie Inn, we set off to walk over the headlands to Holywell beach though due to storm clouds arriving we cut the walk short and took an alternative route back to the car and a well earned G&T at the pub (well I did, he was the designated driver 🙂 )

We set off to walk around Pentire Point West with its amazing views northwards towards Newquay and Trevose Head. You can just about make out the lighthouse on the far left of the image below. 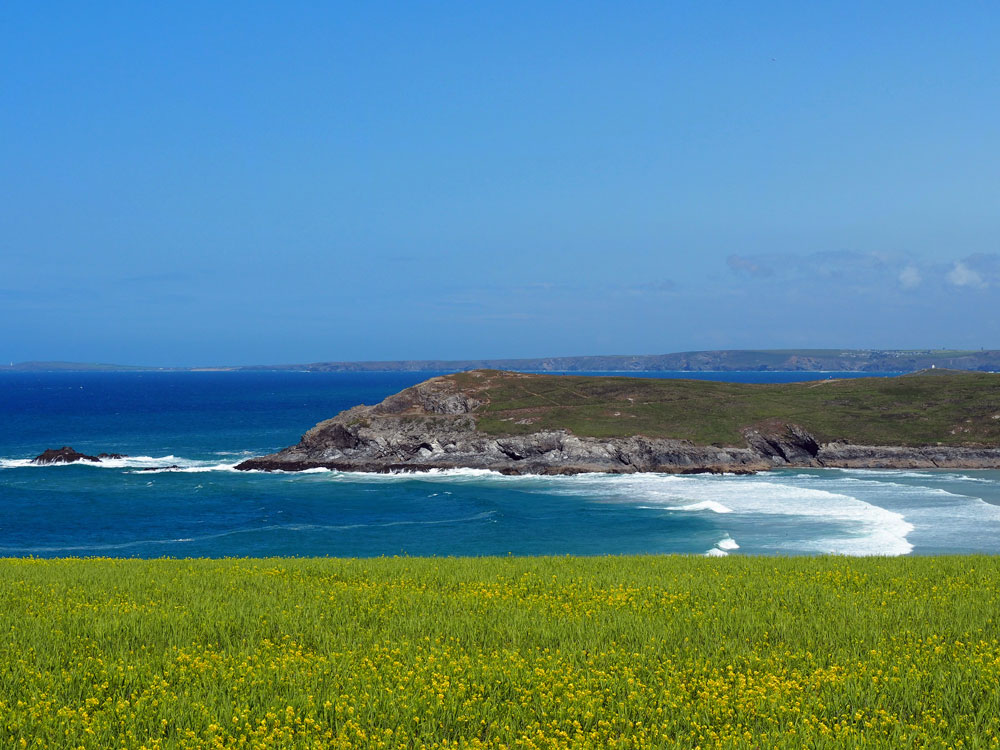 What we weren’t expecting was the sheer contrast of bright yellow rapeseed against the blue sea and sky. Well, blue for the moment anyway. 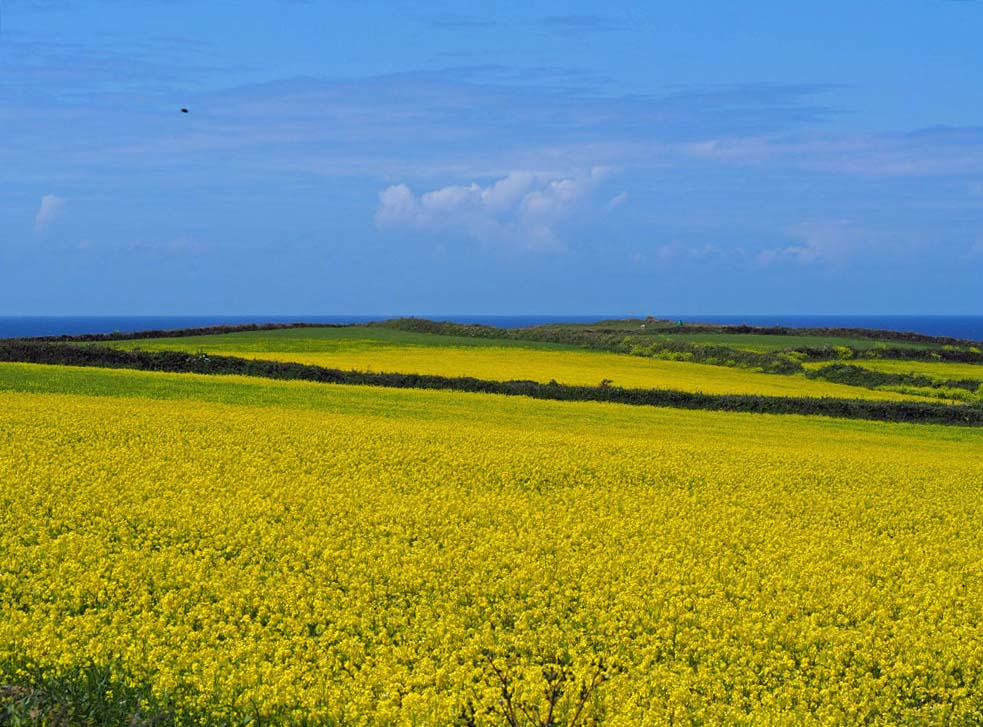 On the other hand I had anticipated in seeing poppies and I was pleased to see that I wasn’t too late this year.

But they of course deserved their own post. I was on the hunt for different views and flowers on the way to Polly Joke beach and to introducing my son to this part of Cornwall. The views were amazing even though we were a little concerned over the black clouds in the distance. Modest benches dot the scenery here and entice you to sit and stare a while. Contemplate and wonder.

Across the beach we could make out the pathways on Kelsey Head that we were aiming for. First though, a walk on the beach was required, even though the tide was making its way in. We spied a narrow track from the beach leading up to the Head. 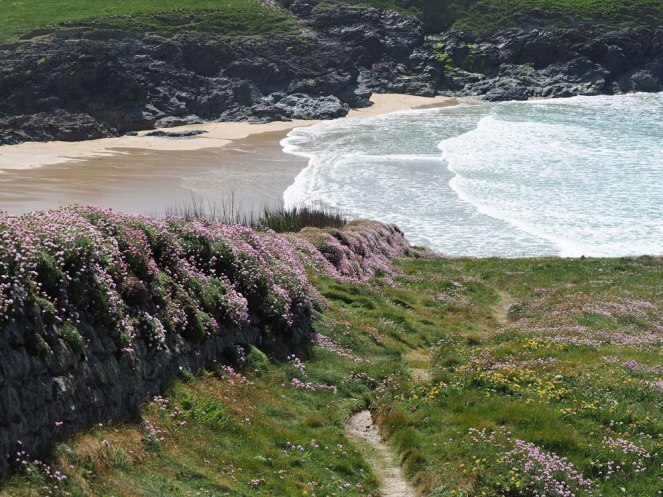 Sea Pink on a Cornish Hedge

Though getting up was a bit of a clamber for me. A nearby stream created a damp patch for a spread of wild Iris pseudacorus, the yellow flag iris. Bird’s foot trefoil was also in abundance. And up on the top we were greeted by a carpet of Sea Pinks (Armeria maritima) as well as an increasingly blustery wind bringing those clouds even closer.

The Kelseys are an interesting ancient area consisting of three enclosures that were important enough to be shown on the first edition one inch Ordnance Survey map (c1809); fields are not usually represented. The inner walls are of considerable height and built like the corn ditches of Dartmoor – a near vertical wall on one side and a gently sloping bank on the other.  At Kelsey Head itself a low bank and shallow ditch of a cliff castle can be seen. From the top looking back towards Crantock the wild poppy and corn marigold fields could easily be seen beyond the beach. 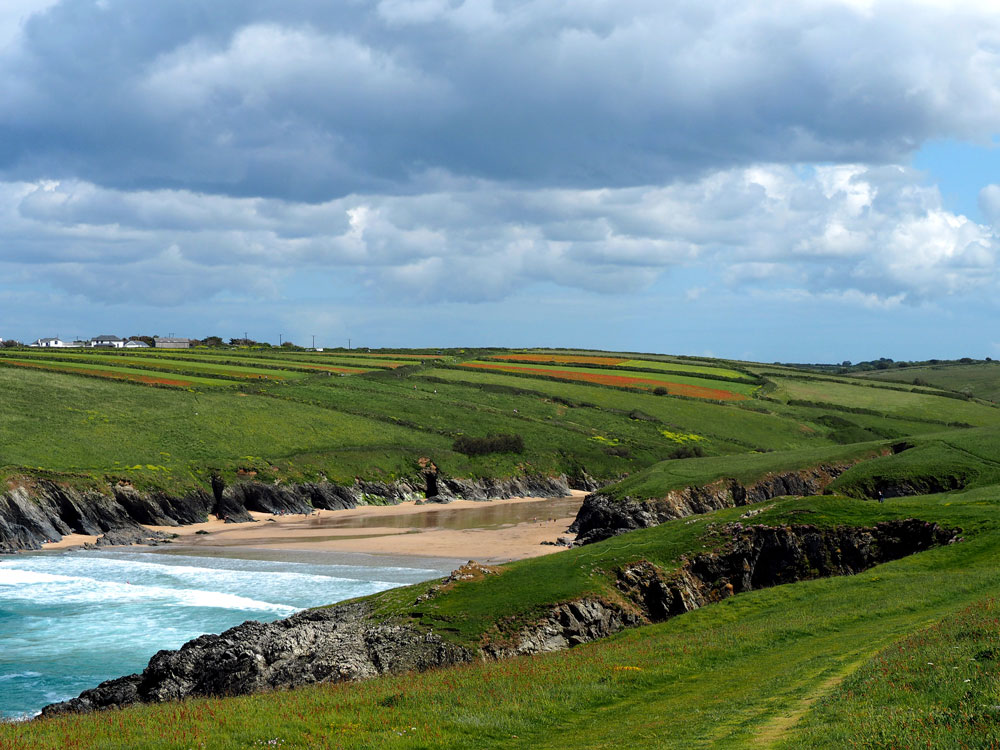 Although our intention had been to continue to Holywell (below) we decided to cut the walk short and head back over the Kelseys to join the path from Cuthbert Common to Polly Joke. We followed one of the enclosure walls part way along and then found a track through to the common. However we soon realised that we were heading in the wrong direction as we were getting further away from the barn that marked our destination so we cut across the  sandy grassland and down to the lane below which brought us out close to the stream that flows into Polly Joke beach. 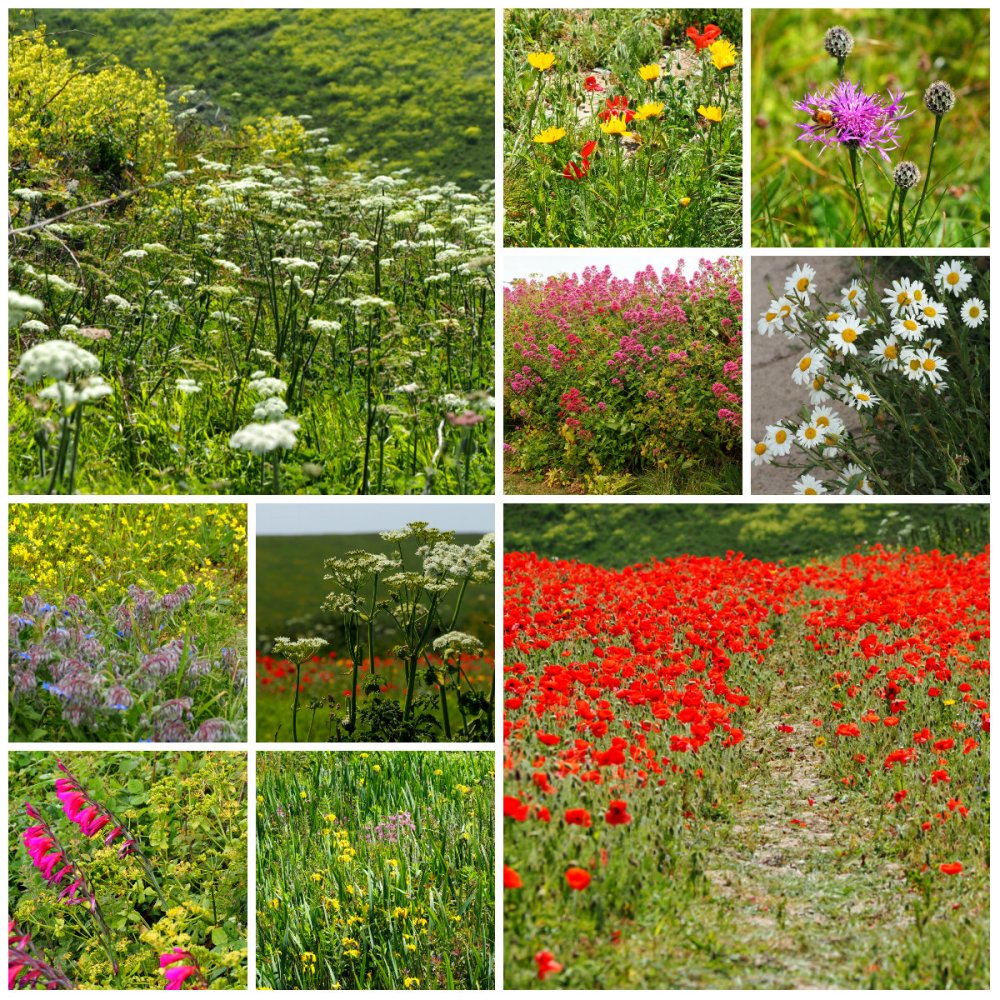 (Above) Wild flowers on the route

Sea campion (or the coastal equivalent of bladder campion), Knapweed, Cow Parsley, Ox-eye daisies and wild primroses were among some of the flowers in this lime rich soil. The primroses had long finished though so I have another excuse to visit this area next spring. 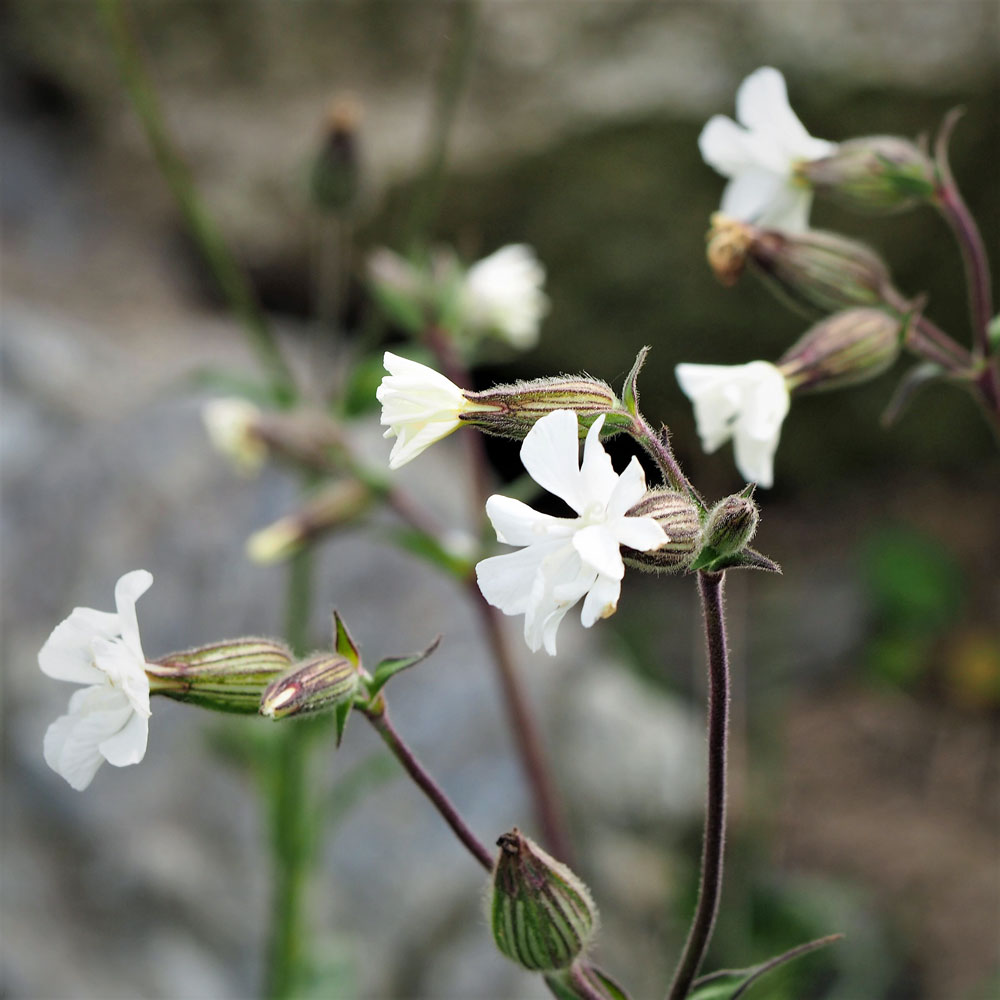 Back at Polly Joke the rain started, but fortunately for us (as we were not wearing wet weather clothing) it soon passed, though leaving behind a much greyer sky than had been two hours previously. Up the steep hill, with a short sit on another well placed bench, we turned into the field edges to photograph more of the poppies. 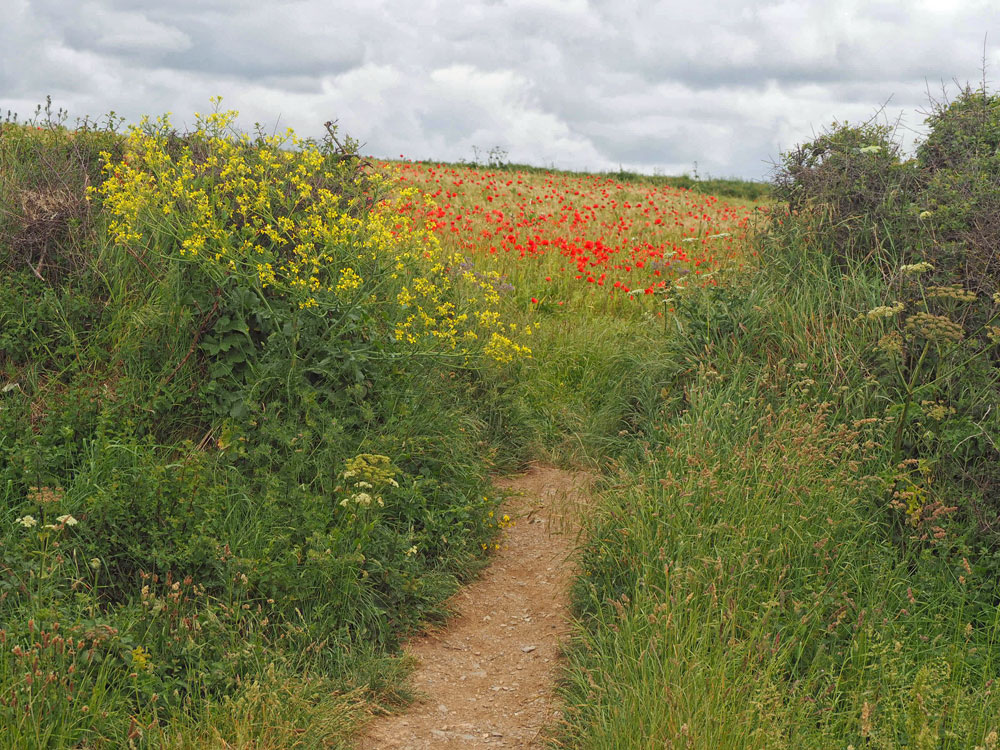 Next time we will try and get to Holywell beach and if the tide is low, try and locate the actual Holy well that gives it its name.