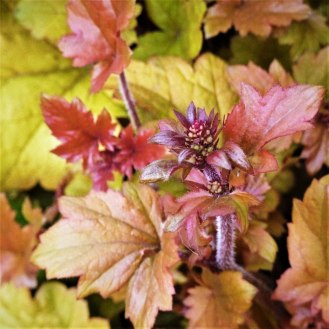 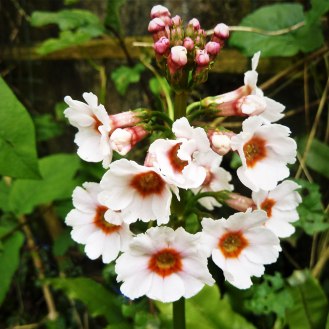 It hasn’t been a bad week for gardening, a few showers, but mostly at night, and a couple of breezy days, but I managed to get the lawn mowed and some weeding done (though that is ongoing as I watch the bindweed and cleavers make their way up anything they can get hold of) and the new herbs are in the raised herb bed. All this is taking time though as I am having to move very carefully on account of the sciatica. It doesn’t seem to want to go away this time and I did eventually cave in and visit the GP who confirmed it is in fact sciatica and will arrange a physiotherapist for me. Meanwhile I have stronger painkillers to help me sleep at night, though so far they haven’t been that successful. Meanwhile the sun shines and the pots need watering!

There are quite a lot of flowers to choose from, including Alliums now taking the place of the tulips, but this week we’ll have a look at what is happening in the Woodland Border. That’s the shady walled edge from the Orangery to my shed that receives late afternoon sun at this time of the year.

A dry weekend is forecast with temperatures rising. By next weekend I hope to have removed the forget-me-nots from the other raised bed and have planted the perennials that are waiting to go there. As always, if you want a peek over other people’s garden walls then please pop over to our host, the lovely Jon, AKA ‘The Propagator’ where you find links to many more wonderful garden enthusiasts from all over the world