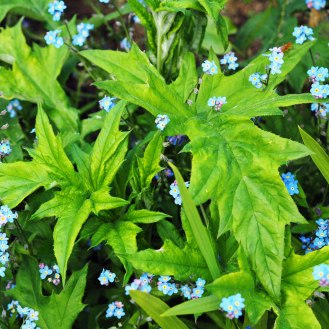 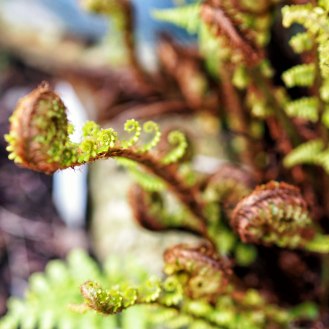 National Gardening Week 2019 is held between April 27th and May 5th. And is run by the Royal Horticultural Society (RHS) to raise awareness of gardening and horticulture, and to encourage more people to take part in the healthy and productive outdoor activity of gardening. Focusing on edible gardening it is appropriate that I have just taken delivery of some tomato and chilli plugs which will be grown in the Orangery.

At this time of the year we are often between the early spring flowering bulbs that are so welcome after a dull, dark winter and the summer perennials, roses and shrubs. Blossom on trees is fading, tulips going over. Time to look at the foliage in your garden perhaps? The many shades of green, the textures and the shapes of leaves. Green forms the backbone of my garden; it is a calming colour (along with blue) and important if you want to create a peaceful, meditative space.

Forget-me-nots have successfully photo-bombed most of the shots today, but their time is up. I have already been pulling them out of the raised beds as I badly needed to plant some new herbs and perennials that can’t wait much longer. I have also been removing dozens of Borage seedlings as I know that they can be thugs in the bed, shading out other plants. It hasn’t been the best of weeks to get outdoors though, being a bit on the chilly side and today is no different, a chilly wind is blowing although the sun is out and the sky is blue!