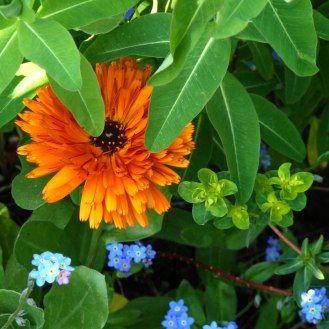 It is one year ago that I decided to join in with the Prop’s Six On Saturday meme. I must say that I have enjoyed every week having a nosy around other people’s gardens and checking out what is happening in my own. There is one problem though. I have ended up with an extremely long list of plants I crave, and rather a large credit card bill. No, not really, I initially set a budget for making changes to the garden when we moved here, and it has been an expensive year buying in new plants as I bought very few up until last spring. I think I have learned a lot about this plot since I moved here three years ago and although I left it well alone for the first year to see what grew, I have still made mistakes. Now I hope that I am choosing plants with more care and making sure they suit the location I have in mind. There are many I have had to say no to on account of the moist soil, heavy winds and exposure, not to mention the S&S, but there are still enough plants to fulfil this plantaholic’s desires.

The biggest and most expensive change over the year has been the conservatory roof – now renamed the Orangery (left). Still sorting out some water ingress issues which seem to be through the granite blocks rather than the roof and I am hoping to get it re-painted inside and out this summer.

Over the next few weeks I shall go into more detail about the planting in each of my different areas, though as mentioned last week, the focus this year is on tidying up the Wild Garden – planting up the Cornish hedge – and getting some more pots into the courtyard at the front of the house. Hopefully that will complete the overhaul of the garden and next year will be a case of tweaking plants that are in the wrong place or replacing those that die. And I shall at last be able to buy a sun lounger…