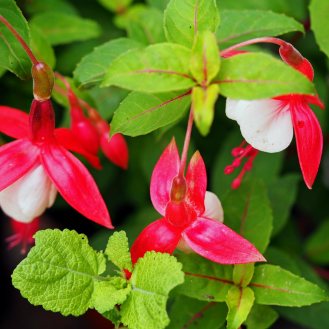 Yes. Fuchsias. Not Fushias. Named after the renowned German botanist Leonhart Fuchs (Fooks) should help you to remember how to spell it. I know, I am a pedant, but it really annoys me when people and even nurseries get the name wrong. I have always loved fuchsias from being a small girl. I think it may stem from the numerous fairy stories I used to read. The flowers look like dainty bells hanging down or ballerinas in tutus or simply elegant ear-rings. I know I have a somewhat vivid imagination. Those fairy tales.  I have always grown them, leaving behind a particularly precious (given to me as a cutting by my father) and rather large shrub when I moved in with the current OH. I did however take cuttings and grew them on in my next garden. Move number two and a couple of those were dug up and potted on and taken with us. Somewhere between moves three and six my fuchsia got lost / died so I started again with a cutting from my mother in law’s garden. To that very ordinary fuchsia (red and purple, single flower) I have added several more tender varieties over the years, most of which died off during the cold winters (having had nowhere to shelter them) though one or two managed to survive. This year I have bought several new very small plants – all hardy varieties – and have been potting them on during the summer as they grew. I have been delighted to see all of them in flower. And a bonus is that the S&S tend to leave them alone. Let’s have a look at six of them this Saturday:

Next year all these shrubs will be going into pots for the north-facing courtyard garden where I hope they will be very happy.

If you really want to see some interesting fuchsias then please pop over to Jim’s site where he has many more of these underrated shrubs.