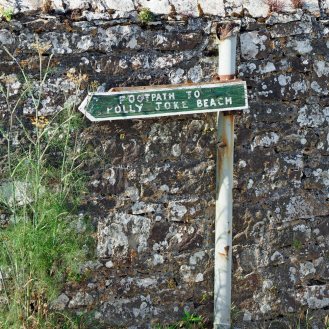 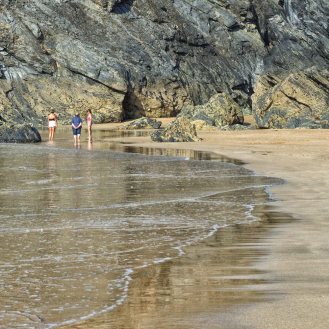 Otherwise known as Porth Joke. (Remember Porth in Cornwall means a bay, port or harbour). The name Polly Joke is thought to be derived from the Cornish ‘Pol-Lejouack’ meaning Jackdaw cove.

It is a V-shaped strip of beach tucked in between Kelsey Head and West Pentire Point on the north Cornish coast close to Newquay.  An area I have longed to explore continuing my Cornish beach discoveries. 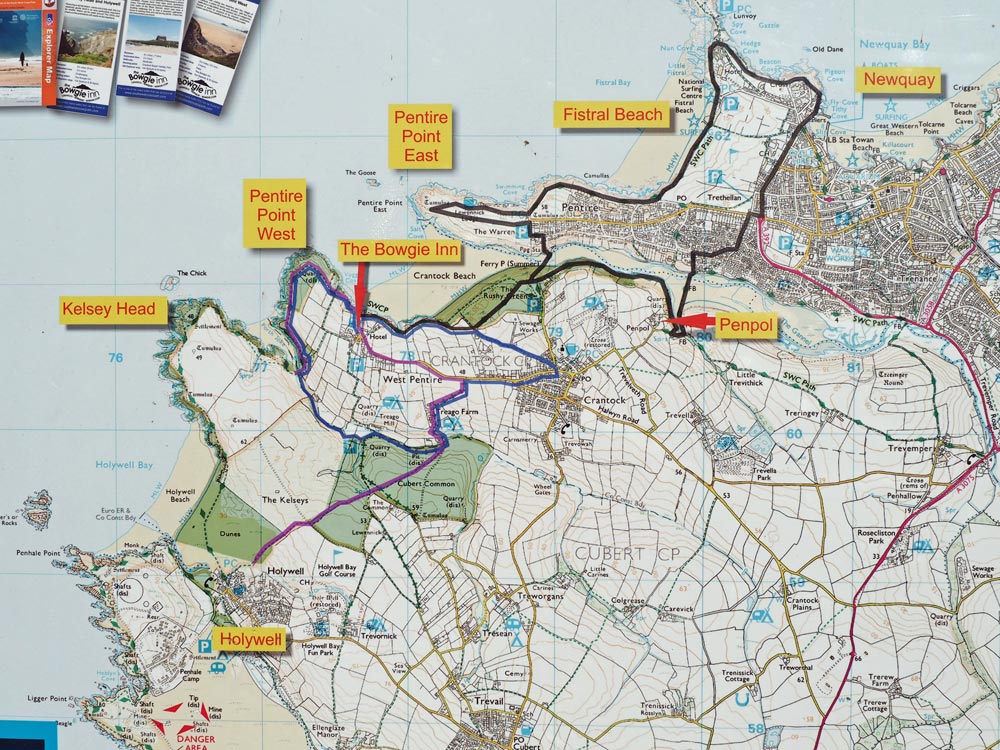 Had I realised just how spectacular the scenery and the views are, I would have been here sooner. Though it shouldn’t have surprised me: the Cornish coast never fails to impress and astound and fill my heart with joy. Since moving down here I have never felt so relaxed, almost soporific at times, so it would be impossible to relax further. But there is something that being outdoors, on a cliff top, gazing into the blue of the sea and the distant horizon, hearing nothing but the soft buzz of insects, the dull thrum of wings as Jackdaws and Crows fly overhead, the warmth of the sun beating down that makes you aware of your own temporality.  I was going to walk on the coastal path around to Holywell beach, but it was hot. Too hot for hiking up and down cliffs and then back again. I hesitated at the signpost which led around the Pentire Point West, but decided to head straight down to the beach and spend some time exploring there. My main reason for coming here, the wild poppies and corn marigolds, were long gone, so the urgency in walking the perimeter of the fields was not there. Another time.

As with many places in Cornwall, this beach is off the beaten track. Steep pathways lead down to the soft sand and there are no facilities here. No WC, no ice-cream van or beach shops: no lifeguards. Its seclusion is the attraction though. And in case you are wondering, it is dog friendly all year round.

Deep caves have been carved into the cliffs on either side of the beach offering shade from the sun and shelter from the wind. I can see myself coming here with a book and maybe even having a swim.

A stream runs down from the fields and is often used by grazing cattle or sheep or even a seagull or three. A small bridge crosses the stream here, but usually it is only at a very high tide in winter that the sea comes up so far inland. 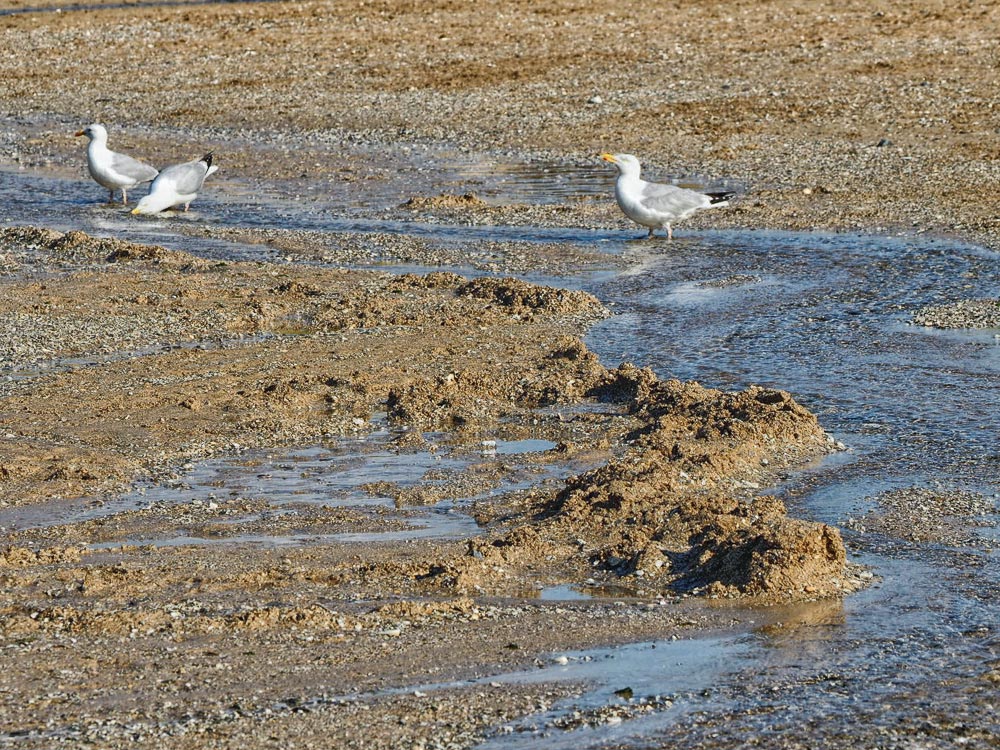 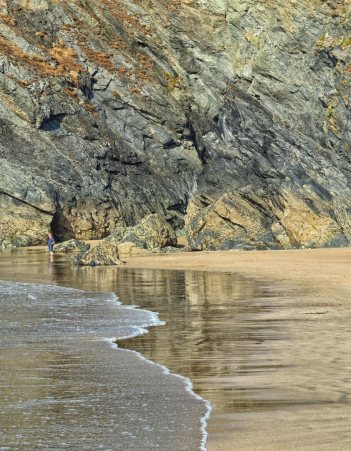 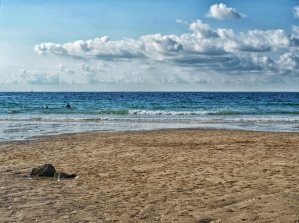 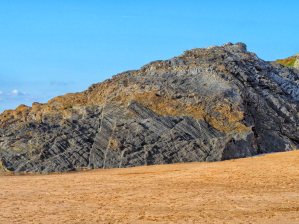 I had timed my visit at low tide so that I had time to wander on to the beach. Not quite realising how far the sea retreated!  At low water the tide goes out over 450m leaving a wonderful flat coarse sandy beach with obvious signs of ground pebbles and shells in the mixture.  After walking down to the water’s edge I watched the few surfers for a while and studied the rocks on the northern edge. There are very few rockpools here.

Regretting not bringing a swimming costume and towel down with me I contemplate whether or not to walk to Holywell beach when I reach the South West Coastal Path again, but decide against walking the four mile  or more miles in the heat and set off back up to the car park. A walk I shall save for the cooler months. 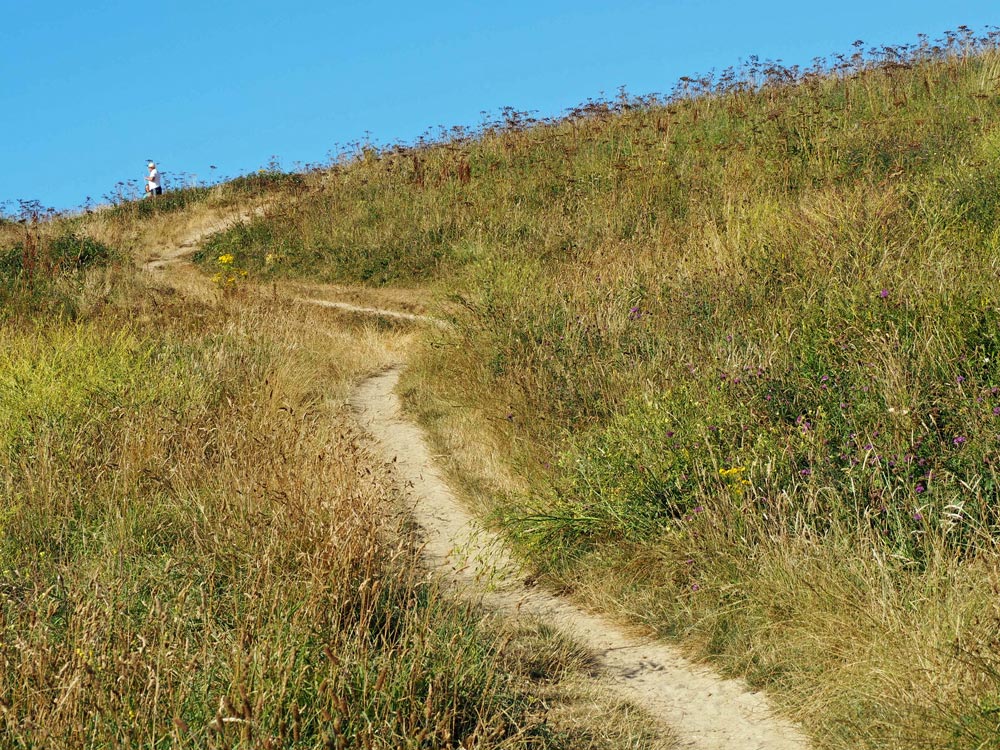 Taking a short stroll to the Bowgie  Inn where there is another car park and food and drink for sale, I had a glimpse at Crantock beach and East Pentire Point and the view north to Trevose Head and its lighthouse. I shall continue my way up the north Cornish coast in September after the crowds evaporate.