It is a walk I have yearned to do for some time now, but summer is not the best time to do it as the car parks around the Cornish coastline are very crowded. As part of my son’s recuperation he is doing a lot of walking and occasionally I join him, though my fitness levels leave a lot to be desired. After a 6 mile walk last week around the Penrose estate and Loe Bar near Helston, this week we decided to give the Godrevy to Hell’s Mouth walk a go. Around 5 miles this walk took us around 2½ hours. My destination was the Hell’s Mouth Café where I knew I could get a coffee and a slab of cake. The boy was not convinced it existed as we tramped along the headlands as in truth, no signs of civilisation could be seen other than the urbanisation of Poole, Camborne and Redruth in the distance and the backdrop of Carn Brea.

We drove to the furthest car park in a field close to the Godrevy lighthouse. The field parking areas are only open until the end of October.

From there we headed up hill to the viewing point overlooking Mutton Cove where seals can often be seen. We continued along the coastal path with farmland on our right and the sea on our left and surrounded by natural beauty and stillness.

The entire St Ives bay is behind, sea sparkling in the sun, tiny figures dotting the wide expanse of  Hayle Towans beaches as the tide retreats and in the distance the dark hump of Trencrom Hill and the beaches of Porth Kidney, Carbis Bay, Porthminster Beach and the tiny Porthgwidden beach of St Ives. It is hard to imagine that once this bay would have been full of sailing coasters taking Cornish slate and copper to Wales and returning with coal. Or Irish vessels laden with pork, linen and  butter. There would be all sorts of exotic food and objects from Africa and South America and the Dutch East Indies. A busy, noisy and all so different scene from today.

The coastal path bends right to follow the edge of the cliff closely as you leave St Ives Bay with views east along the north Cornwall coastline to Portreath, Newquay and Trevose Head.

A gate leads through to “The Knavocks” an area of heathland where you can wander off the main path to explore the vegetation. Shetland ponies graze here to help keep the more vigorous plants in check, but we didn’t come across any. At the Trig Point you can just about catch a glimpse of the top of St Michael’s Mount on the other coast. 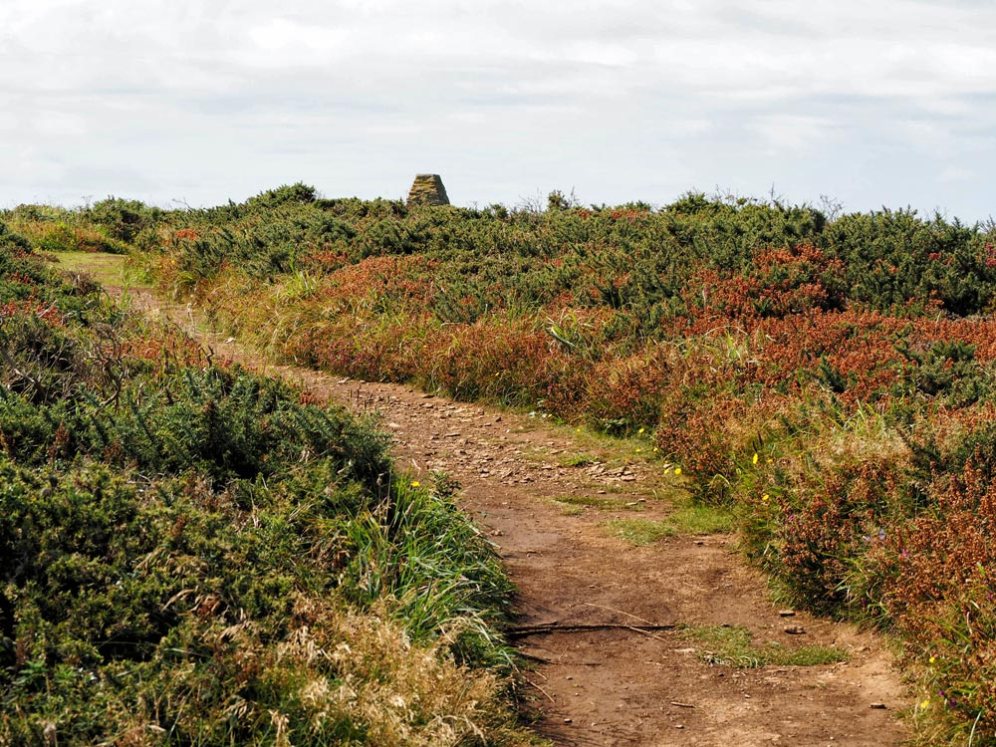 Trig Point on the Knavocks

Coves and caves are woven into the cliffs and now and then you catch a glimpse of pale sandy beaches, turquoise water and the occasional seal lying on a rock. You can almost visualise the pirates and smugglers of the day dragging their haul into these secret stores.

The views from along the path here are stunning. Still no sight of a café though.

Now you have to cross over two granite stiles at either end of a farmer’s field, thankfully empty of cows, and a stony path continues along the cliff top edged with wild blackberries and sloe berries at this time of year.

Turn left through a pair of granite gate posts to follow the coastal path which eventually drops down as it reaches the dramatic rocky inlet at Hell’s Mouth, a group of steep cliff faces some 300ft tall. Here you can watch seabirds swoop and dive around the cliffs and offshore rocks. But don’t stand too close to the edge! It is a long way down!

People on the top of Hell’s Mouth

We made our way across the road to the Hell’s Mouth café for a sit down and coffee and cake. Sadly no carrot cake, which I have been dreaming of for several years, but a substantial slab of raspberry ripple for me and hearty apple cake for him did the trick whilst we watched black clouds scudding across the sky towards us. A brief shower saw us hastily moving indoors clutching our cake and after the rain moved out to sea we felt re-energised enough to make the return trip and burn off all those calories.

This time we continued round onto Godrevy Point, the closest you can get to the lighthouse unless you go by boat, and where once more the view is that of St Ives Bay.

The slate and stony path leads downwards and climbing over a final low stone stile we reached the meadows and car park with the sound of dozens of noisy oystercatchers on the rocks below echoing in our ears.

If you like a walk, long or short, then please visit Jo for her regular strolls in the UK and the Algarve and maybe you would like to join in too. She’s very welcoming.