Oh, March, where did you go to so quickly? You flew by without me noticing and without my usual photo excursions. You started off raging like a lion, fierce winds ripped through the garden and down the chimney flue causing it to whistle and whine and making it too dangerous to light the fire. This was followed by a week of fog and mist and greyness. March has been the greyest month so far despite the lengthening of the days and then the forwarding of the clocks giving us an extra hour of daylight in the evening.

I watched as my hyacinths flowered and then were battered by the wind, the rain, the hail. I watched the daffodils in the lane bloom and die before I could even get a photo of them. I watched the garden birds chase each other around the trees: the chaffinches, the house sparrows, robins, blue tits and great tits. Willy Wagtail has been missing in action and the fieldfares have flown back to their homelands, even the starlings have departed to pastures new. So it is back to the corvids who have taken their position on the roof of the barn once more. A lonesome buzzard made an appearance and circled the sky looking for prey. 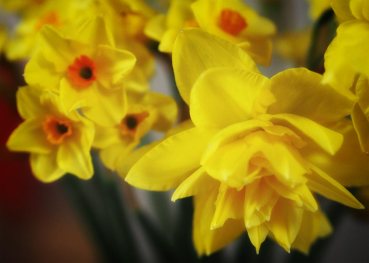 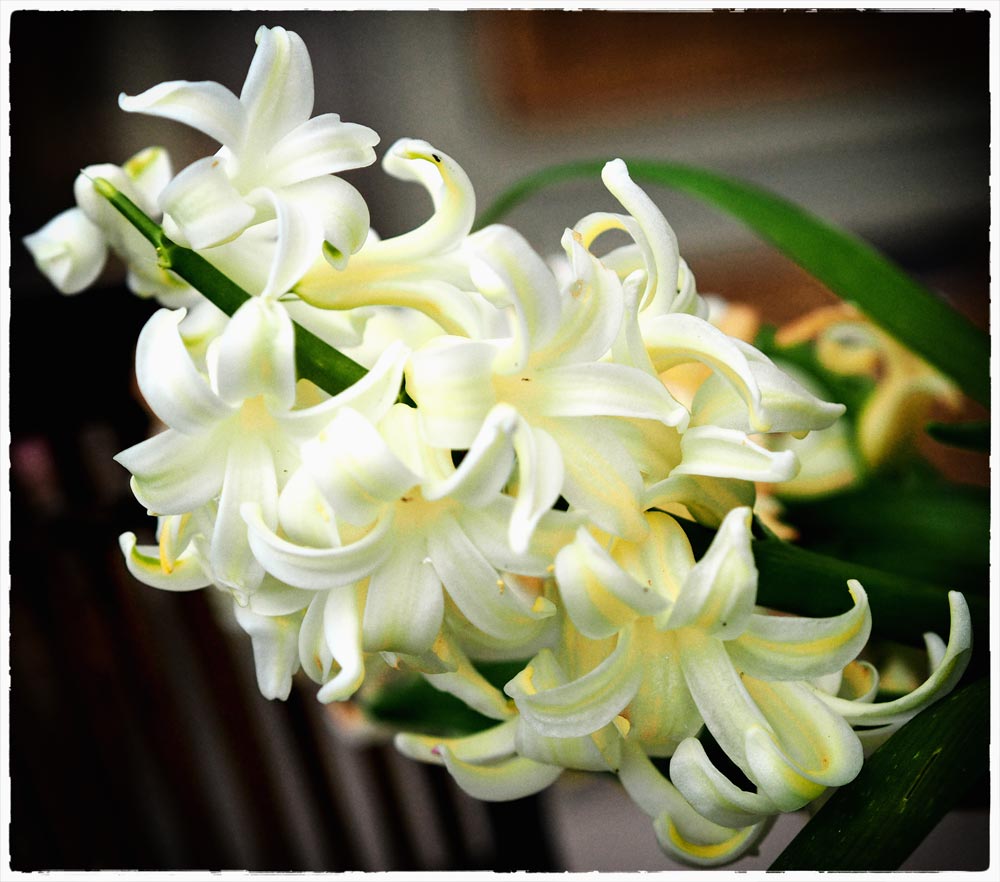 We have made a decision not to try and convert the two small rooms into one large one and open the loft as a mezzanine as it has become apparent that this is a lot more work than we had anticipated. For some reason builders are not keen to take on the work, so we need to get an architect in and that will push the price up. As well as that we have loaned part of our house fund to my daughter to help her to extend her house and create a 3rd bedroom for the boy child. I say child, but he turns 15 next month and had thus far spent 13 years sharing with his sister(s).

So, the remaining money in the pot has now been spent on a new bed and mattress (when did they get so expensive?) and flooring for the “east wing”. Which meant removing all the furniture already in those rooms, and decorating them before the flooring goes down. It took me weeks pouring over paint charts to decide on colours, and with both the rooms being north facing and receiving little light (deep walls) and no sunshine, except for one which does receive some light from a south-facing Velux, it was a tricky decision. White is too cold, yellow can be sickly and I longed for some colour after years of living with neutral decor. So the music studio/office (the room with the most light) has become a quartz grey with soft white trim and the 2nd bedroom is now a gentleman’s club with deep grey-green walls which hopefully will come alive with the warm oak of the new bed and some strategic lighting.

Several windows and misted up ones are going to be replaced so at last it won’t look as though it is constantly raining. Because it isn’t, really, even if I do complain about the fog a lot.

Of course all this emptying of rooms has had a significant affect on the rest of the house and being open plan it means the whole place looks cluttered and messy again. I wish we had done this last year before we moved in, but sometimes you need to live in a place before you understand how best to use the rooms and how they react to light throughout the year.

This has had an impact on the amount of blogging I have done this month too. Although some of that can be blamed on our abysmal connection this month. Some evenings it doesn’t stay up long enough to even view a blog, let alone write a post! Despite upgrading the router to the best(?) our broadband seems to be getting worse. Soon it will be time to bite the bullet and speak to BT – something I am not looking forward to.

The sheep are in the fields, the cattle are grazing once again and the bulls next door are practising for the choir, though to be fair I hardly notice them now. Hawthorn or is it blackthorn is in flower and my tulips are already beginning to open. And Alice is still there whenever I look outside.

So, March has gone. We have been in our new home a year now and it feels as though we are settled in.  The house is a tip – AGAIN!! Though at least there is no book mountain… and soon we shall have everything back in its place. And hopefully I shall make the time to do the things I kept saying I would do in March! Like a walk on the beach, visit a few gardens, go out for lunch. You know, those important things in life 🙂

(And yes, I do realise that I am posting this in April, but I was hoping you wouldn’t notice)

The Cardinal is continuing his photo project throughout 2017 – a blogging event, a monthly photo challenge. Read his blog for the new rules this year (he is running two versions) and to view his interpretation and those of other participants.