Before I moved here I thought that May would be my favourite month. A time when the days are longer and lighter, the weather warmer and late spring flowers erupting everywhere, in the hedgerows, along the coastal cliffs and in the woodlands. I thought I’d be out and about a lot more than I have been, but then I wasn’t expecting to be living in a cloud for the best part of a week. Especially when the rest of the country appeared to be roasting in a heat wave. Welcome to Cornwall.

I can’t say that the foggy weather actually bothered me too much, for one thing I don’t cope well with heat. As a fair skinned former redhead the sun has never been my friend. So soaring temperatures are not what I look forward to. Watching the hills appear and retreat in the mist was interesting. Flocks of seagulls took over the field and the cows laid down. All the little garden birds seemed to disappear. It was quietly eerie, or is that eerily quiet?

At the end of April we visited an Open Garden near Redruth – Scorrier House. It is not normally open to the public so I thought it would be a lovely opportunity to see the camellias and rhododendrons there. In reality it was disappointing. The gardens were quite small and not much was in flower. It feels a little neglected, but as the entry fee goes to charity I didn’t feel too bad. And I got a few decent shots. 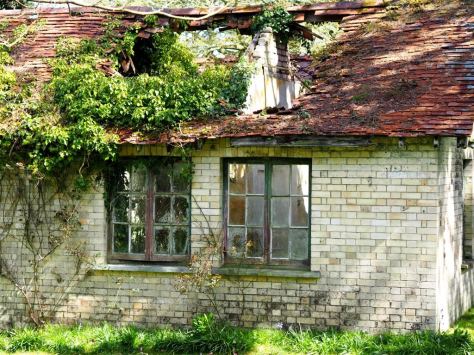 On the way home we drove along the coast road, stopping off at one of the North Cliffs car parks and strolling along the coastal path. Lovely views north to Porthtreath and south to Hell’s Mouth and Navax Point and lots of lovely wild flowers including bluebells, gorse, red campion, wild onion, Danish scurvy grass and dog violets. 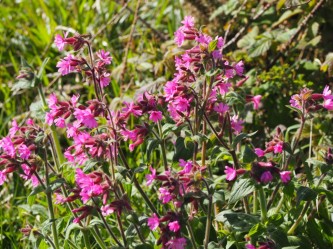 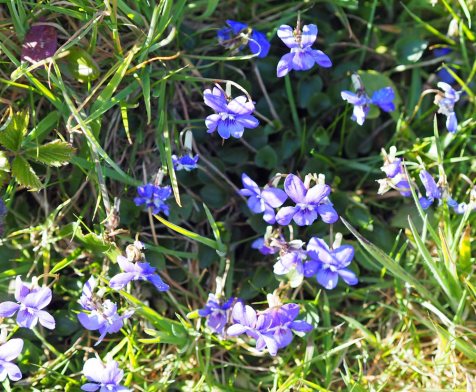 I returned to the Tremenheere Sculpture Garden on one sunny day in early May with the idea of photographing textures. Not a bad idea, but the camera had other plans and began to freeze and lock after every picture. That quickly became very annoying. I almost had the garden to myself and spent a happy hour sitting with a book before heading for the restaurant and having a lovely lunch of smoked haddock, crème fraîche and leek quiche served with warmed new potatoes and mixed leaves washed down with a fresh, suitably tangy local lemon drink. 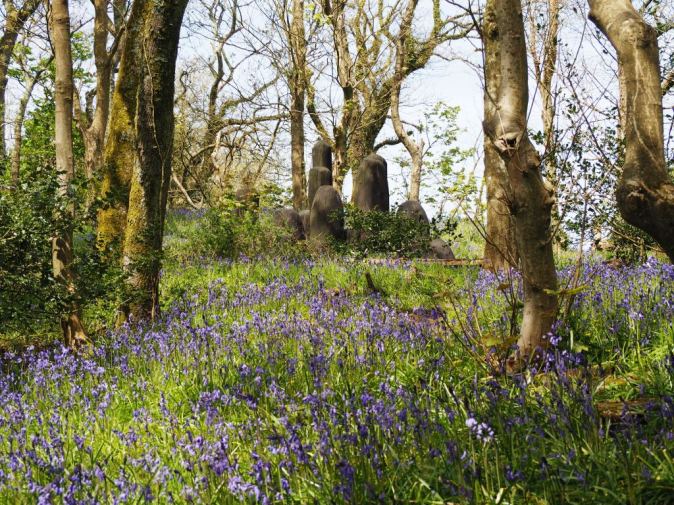 I also bought a longer stepladder and managed to clean most of the Velux windows – outside and in – I ordered lovely wrought-iron curtain poles for two other windows and the OH managed to put up a couple of new window blinds. We also decided on a new house name sign in Cornish slate, but still looking for a mailbox. I quite fancied a very ornate looking one with sculptured narcissi, a tortoise and a dragonfly embellishing it, but had to agree that it is probably a little OTT.  I poured over paint charts AGAIN, changing my mind AGAIN. White? Off-white? Grey-white? So many choices. I found the box containing my cookery books and recipes so I could once again make my favourite chowder and in doing so discovered my gardening books which meant a few lost hours sitting in the conservatory and pouring over ideas for the garden. It is a little garden by the way. So there is no way I can have it all.

Talking of which I did get some things done in the garden. Still not sure what is a weed and what is a plant, I am watching and waiting. The daisy lawn got mowed, and the daisies re-appeared within hours it seemed. I always hate mowing daisies. I pulled out a few dozen forget-me-nots as there are many more to enjoy and put in some of my succulents from the pots I brought with me. I pulled out a few nettles, but left some for the insects and bees to enjoy. I pruned what I think is a jasmine as it was in danger of invading the conservatory. It is now shooting out splendidly. Some plants came out of pots and in to the garden. Other pots got moved to the front of the barn where the sun doesn’t reach (north facing) and where hopefully they will be happier.  I planted some sweet-pea and chilli seeds and took some cuttings of other plants that needed chopping. I can’t do much more until someone helps me rebuild the raised beds at the back. The clematis are budding, the trees have greened up and the Cornish walls are sprouting new ferns and Common Hogweed, Herb Robert and Cranesbill, both types of wild hardy geranium. A couple of arum lilies have appeared amongst a cluster of irises that have yet to flower. It’s quite exciting not knowing what is going to erupt next! 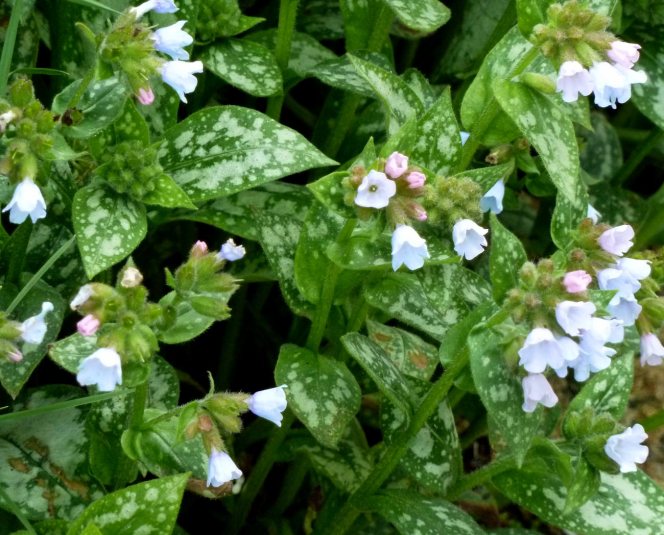 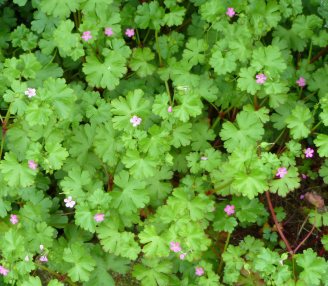 Some sort of tree 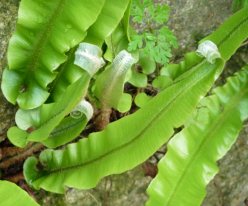 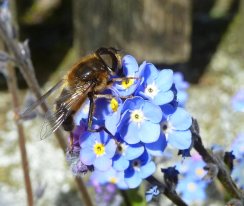 Country living is very different. I find myself gazing out of the window watching the antics of the birds and animals. I never knew that calves gambol. Such fun to watch them play, mock charging like baby elephants, chasing the sheep and each other. Nor did I realise how wide a bull’s bum can be! When five of them were let out in to the field in front of us I made a note NOT to walk through that one. We watched a buzzard fly overhead and a horseshoe bat come out at dusk to munch on the swarms of gnats and midges. And one Sunday afternoon the farm across the fields held a gymkhana, so whilst I lazed in the sunshine reading my book I heard a voice over a tannoy announcing Samantha and Hercules coming second. Or poor Hilary who gained 2 penalty points at the last jump. All rather surreal. On another weekend two local farmers (?) were shooting rabbits in the fields nearby. I don’t think I shall ever become a ‘proper’ country person.

We went in to St Ives a couple of times and found the library (it wasn’t really lost), a butcher, a greengrocer and a baker all pretty much in one street. We took yet more photos of the harbour and the sea and the coast and the beaches. A robin, a blackbird, a long-tailed tit. OH got his new concessionary bus pass. He went to an open mic session at a local pub and when I went to  pick him up at 11:23 it was still in full swing. An hour later I drove him home. I have since given him a couple of business cards for local taxi firms.

We discovered another farm shop where the eggs are larger and cheaper as is the saffron cake. But the rose lemonade is more expensive. Swings. Roundabouts.

The highlight of the month is that we gained a new grandchild. Another Aussie boy – Luca – brother to Lorenzo. So now we have granddaughters = 4 and grandsons = 3.  The boys are catching up at last. And at the end of the month three of the English contingent are coming down for a holiday. Goodness knows where they will all sleep given we still have a box mountain in the hallway!

And I had my first barefoot walk on the sand.

The Cardinal is continuing his photo project throughout 2016 – a blogging event, a monthly photo challenge. Read his blog for the new rules this year (he is running two versions) and to view his interpretation and those of other participants.